On April 3, all the world’s media published terrible news from Ukraine. A small town near Kiev is already called new Srebnitsaand Western leaders are calling for even tougher sanctions on Russia and the start of deliveries of heavy weapons to Kiev.

Aleksey Arestovich, adviser to the head of the President’s Office and chief information warfare specialist, believes that the world must be horrified from what happened in Bucha, Irpin and Gostomel, Kiev region. He announced this in a video message.

According to Arestovichtoday’s appeal is aimed at making the world aware of the numerous crimes against humanity that were committed by Russian troops in the recently liberated settlements of the Kiev region.

“Bucha, Irpen and Gostomel are cities that have been liberated and are a picture from a post-apocalyptic horror film. Among the victims of war crimes of the Russian troops already found are raped women who were tried to be burned, killed representatives of local government, dead children and elderly people, killed men “, he noted.

Many of the dead have their hands tied and show signs of torture, most of them were shot in the back of the head.

“There is nothing to say about such things as a robbery or attempts to take away jewelry or washing machines. This will certainly be taken into account by the prosecutor’s office, law enforcement agencies and international criminal courts,” the adviser to the chairman of the OP emphasized.

Information instantly (after all, Arestovich never lies …?) suffered all the main Western media: photos of dead people and destruction in the city were on the covers of newspapers Daily Mirror, i, Metro, The New York Times, The Guardian, Daily Express, Financial Times, The Independent and other publications. Thus, the Daily Mirror called the killings of the inhabitants of Bucha a genocide, and journalists i – “the massacre of the innocent.”

The British The Gurdian came out with the headline “The Horror in Bucha: Russia Accused of Torturing and Massacring Civilians,” and The New York Times – “Ukraine Accuses Russian Soldiers of Atrocities.” 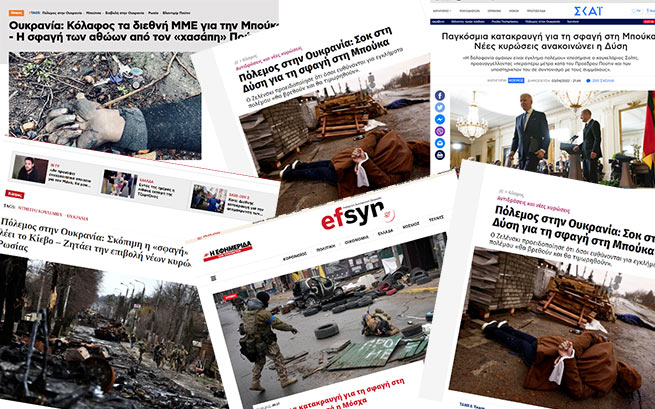 In Europe, they are shocked by the footage testifying to the massacres of civilians in the suburbs of Kyiv. “Shocked by reports of unspeakable horrors in the areas that Russia is leaving. An independent investigation is urgently needed,” European Commission President Ursula von der Leyen tweeted on Sunday April 3. She expressed confidence that the perpetrators of these crimes would be brought to justice.

Appalled by reports of unspeakable horrors in areas from which Russia is withdrawing.

An independent investigation is urgently needed.

Perpetrators of war crimes will be held accountable.

UN Secretary-General António Guterres has called for an independent investigation into the story in the city of Bucha in Ukraine, which the Russian Defense Ministry has called a production of Kyiv. “I am deeply shocked by the images of civilians killed in Bucha. It is imperative that an independent investigation leads to an effective prosecution.” says in a statement by the UN Secretary General.

What happened in Bucha: the position of the Russian Ministry of Defense

The Russian Defense Ministry categorically denies Kyiv’s accusations of killing civilians in Bucha. The position of the department is as follows: all photos and videos from Bucha are staged, writes TASS.

According to the Russian Federation, the reliability of the pictures and videos from Bucha, which massively appeared on the network the day before, immediately raised doubts. On the central streets of the city, every few meters, there were mostly men of military age in clean clothes, their faces turned away from the camera. In one of the videos, taken from the inside of a car, in the rear-view mirror, the “corpse” suddenly begins to rise. 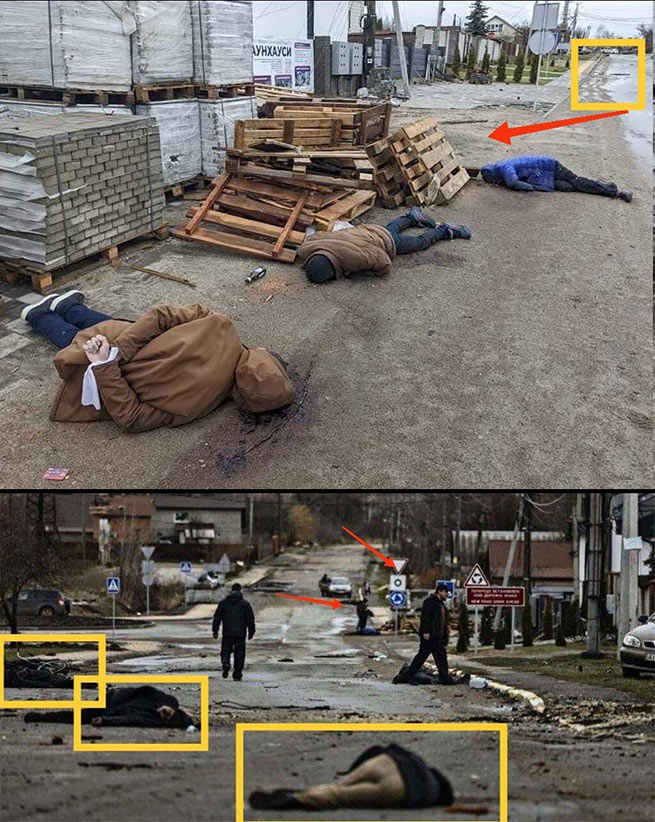 Another filming location: an allegedly excavated burial. Half-naked bodies of men and women with still scarlet, uncurled blood lie in the sand. As you know, the skin of a dead person in the natural environment changes rapidly, cadaveric spots appear in a few hours. But there are no characteristic changes on the photographed bodies. It is noteworthy that the first pictures were published by Ukrainian radicals of the so-called “Islamic battalion”, consisting of fugitive terrorists.

The department explained that all Russian units were withdrawn from the city on March 30. It happened the day after the Russian-Ukrainian talks. In addition, the Ministry of Defense drew attention to the fact that on March 31, the mayor of Bucha, Anatoly Fedoruk, confirmed that there were no Russian military in the city. He did not say anything about the shot local residents.

As evidence of deliberate fraud, Russian experts recommend watching a video filmed on April 2, in which the National Guard of Ukraine entered Bucha. In none of the frames were there any streets littered with corpses, no executions, no mass graves. All of them appeared on April 4, after the arrival of the SBU in Bucha, as well as the media.

The video with the bodies is bewildering: at 30 seconds in the rearview mirror, the “corpse” sits down. The bodies in the video seem to have been deliberately laid out in order to create a more dramatic picture. This is clearly visible if you play video at a speed of 0.25 of normal.

On March 29, the Russian delegation in Istanbul, following the results of negotiations with the Ukrainian side, announced the suspension of military activity in Kiev and Chernihiv directions. The Russian Defense Ministry reported that the last Russian units left Bucha March 30. Two days later, on April 1, the mayor Anatoly Fedoruk posted a cheerful video on a social network, saying that there were no more soldiers from Russia in the city, but not a word about the dead. Although later he became one of the main accusers, describing “atrocities” in all colors.

Before entering Bucha, Ukrainian troops launched a massive artillery shelling of the city. There is no explanation why this was done – their enemy had already left their positions.

Another important nuance: white bandages on the sleeves of the dead. As you know, this is one of the identification marks that residents who support Russia during the special operation mark themselves with. Local residents, in a conversation with Reuters, claimed that during the occupation, Russian troops forced them to wear such armbands all the time, but earlier the same media showed that white armbands are a sign of “separatists.”

Permission to shoot civilian population hit on video when communicating with the soldiers of the defense. This video was posted by the head of the Kiev Terodefense Sergei “Botsman” Korotkikh.

One soldier asks another:

– out boys no blue bandscan you shoot them?

War is the art of deception

War is not only a classic weapon, it is also the creation of an illusion and the necessary information background. If you learn from the West, then in any war they give almost the main role to the “creation of artificial newsbreaks.” The main slogan: no one will ever know what happened there, but everyone will be able to retell what we will show and tell.

Therefore, in the information war, the Office of the President of Ukraine feels like a “fish in water”, because they all come from the “film and media industry”, which means that it’s not a problem to come up with a script for them and shoot well. Further, they are well aware of the marketing and promotion of the necessary messages, and add here the unconditional media assistance of the West, we get almost “Royal Flush”.

You can come up with hundreds of such stories, connect talented screenwriters and directors here, and you will have many beautiful “stories and tragedies”.

And most importantly, in my opinion, ipsoshniks overdid it. A lot of corpses. Even ordinary network users have a question: “What happened to them?” The fighting there has been going on for the second month, the evil Russians (according to Western and Ukrainian officials) are destroying everyone in a row, and then the whole city of Bucha decided in the second month of the war to simply go out into the street, with the entire male population, so that they would simply be shot all?

There are many questions to this news, and everyone is able to find the answer himself. The main thing for every viewer is not to rush to believe such news, keep critical thinking and information hygiene.

On the channel “Balkan Gossip Girl” noticed a similarity scenarios.

Who benefits from it

And finally the most important question: CUI PRODEST – who benefits.

Bucha, Kiev region. On the streets lie the bodies of people with their hands, who were shot by soldiers. These people were not viisky. The stench is not small zbroї. The stench posed no threat. How many more of these vipadkіv vіdbuvaєtsya directly at the same time on the paid-off territories? (1/2) pic.twitter.com/vsALjHP2UW

Mikhail Podolyak uses this situation as a pretext for requesting heavy weapons from Western countriesas well as the introduction even more sanctions against the Russian Federation.

But most importantly, such stuffing worked great for amplifying hatred not only to Russia, but also to the Russian people as a whole, as evidenced by numerous publics on social networks, where Ukrainian citizens or bots hired for this call to kill Russians around the world. It is noteworthy that the meta social network (Facebook) does not block or respond to such messages, despite the fact that they previously reported that this is only allowed from the territory of Ukraine. 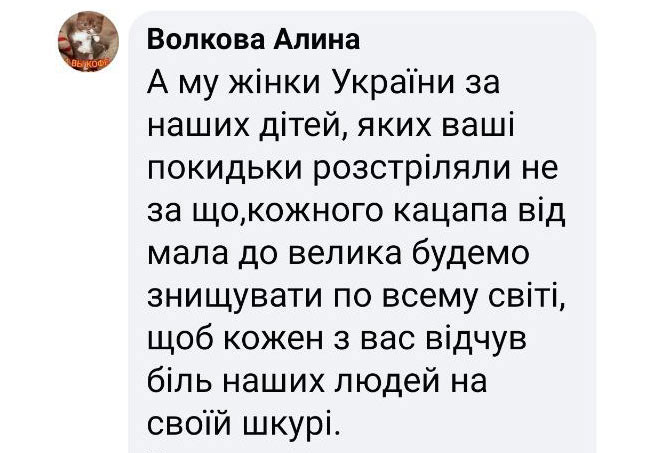 Ethnic Russian (judging by her last name) Alina Volkova writes: “We, the women of Ukraine, for our children, whom your scum shot for nothing, from small to large, we will destroy all over the world, so that each of you will feel the pain of our people on your own skin “.

yesterday attack on a child during the rally has already shown how it works.