Like us previously reportedon the island of Corfu, unknown vandals desecrated a monument to Admiral Ushakov, opened in 2002 near the New Fortress.

Unknown people desecrated the monument, staining it with red paint.

One of the possible reasons was that the President of the Russian Federation V.V. Putin declared March 18: “NThe beginning of the special operation coincided with the birthday of the great Russian naval commander, who did not lose a single battle in his military career“.

One week before the Corfu vandalism in Athens desecrated a monument to Soviet soldierswho died for the freedom and independence of Greece. Unknown people wrote “Azov” (Ukrainian neo-Nazi unit located in Mariupol – ed.) on the monument with yellow paint and drew the symbol of this regiment. The Russian Embassy in Athens condemned the act of vandalism and called on the Greek authorities to find and punish those responsible. The Russian Foreign Ministry demanded to prevent the recurrence of such incidents. 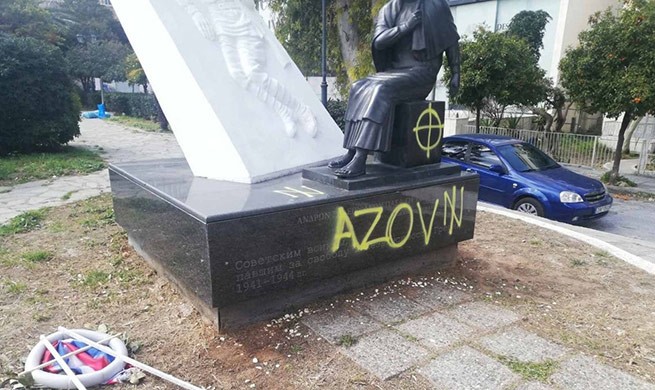 “Kerkyra. Another anti-Russian act, which is also directed against our common historical heritage,” the embassy wrote.

Russians, Greeks and representatives of other nationalities living on the island of Corfu cleared the monument and held a peaceful rally on March 30, 2022. Honorary Consul of the Russian Federation in the Ionian Islands Nikos Kanulas also took part in it.

“Dear ladies and gentlemen, we would like to thank everyone who came to our rally today.

People with an active life position have gathered here today to express their resolute “no” to the unacceptable act of vandalism that occurred on the island of Corfu – the monument to Admiral Ushakov was doused with red paint. This is an immoral attempt to offend history and desecrate an Orthodox saint.

You all know that the historical paths of the Russian and Greek states were inextricably linked in history. Admiral Theodore Ushakov liberated the island from Napoleon’s army in 1799. He became the initiator for the first time in the history of the formation of a semi-independent state of the seven Ionian Islands. He contributed to the fact that for the first time after 550 years of Catholic rule, an Orthodox metropolitan was elected on the island. Russia contributed to the restoration of Orthodox churches destroyed by the French.

As you all know, Theodore Ushakov was canonized as a saint and is very revered in Greece. And now the monument to this great man was desecrated. First of all, this act is an insult to Greek citizens. Greek monuments. Greek shrines.

We say a resolute NO to vandalism, desecration of shrines, any manifestations of ethnic hatred! We have been living and working side by side on the island of Corfu for many years. Representatives of all nationalities have gathered in our Russian-Greek society: Greeks, Russians, Ukrainians, Moldavians, Georgians, Tatars, Kirghiz, Serbs, British, Hungarians and others. For many years we have been living in friendship and respect for any nation, for any people, for any national history. We deeply mourn the disasters that have befallen Ukraine, our hearts weep, but we call for peace, friendship and prudence!”