The Russian Federal Security Service (FSB) issued a statement warning that sea mines planted by the Ukrainian Navy on the outskirts of its Black Sea ports could enter the Mediterranean through the Bosphorus.

Of course, it will be difficult for them to cross the straits unnoticed, but experts do not miss this opportunity, and Turkey is already taking appropriate security measures.

In a statement released on Saturday by the Public Relations Center (CSO) of the FSB, reportedthat the Armed Forces of Ukraine mined the approaches to the ports of Odessa, Ochakov, Chornomorsk and Yuzhny. There is a danger of these mines drifting into the Bosporus and into the seas of the Mediterranean basin.

“After the start of a special military operation by the Russian Federation, the Ukrainian Navy carried out the installation of minefields on the approaches to the ports of Odessa, Ochakov, Chernomorsk and Yuzhny (about 420 mines of obsolete types of NM (anchor mine) and NRM (anchor river mine), produced in the first half of the XX During the onset of stormy conditions, cables (minreps) began to break, connecting mines with bottom anchors,” the CSO said. The center added that “mines, under the influence of wind and current, freely move (drift) in the western part of the Black Sea.”

“Given that in the areas of the listed Ukrainian ports surface currents of the southern direction prevail, the possibility of the drift of derailed mines into the Bosphorus and further into the seas of the Mediterranean basin is not ruled out,” the secret service said. The FSB emphasized that “the breakage of the mines indicates the unsatisfactory technical condition of the mines.”

As stated in the CSO, “the Armed Forces of Ukraine once again demonstrate a complete disregard for the foundations of international law and disregard for human lives, including citizens of the European Union.”

At the same time, in accordance with the Convention on the laying of underwater, automatically exploding from the contact of mines, it is forbidden to anchor them, they become unsafe as soon as they break from their minreps, the CSO reported.

The FSB said that “taking into account the mine danger, the Black Sea Fleet of the Russian Navy published the corresponding coastal warning No. 116 of March 18, 2022.” 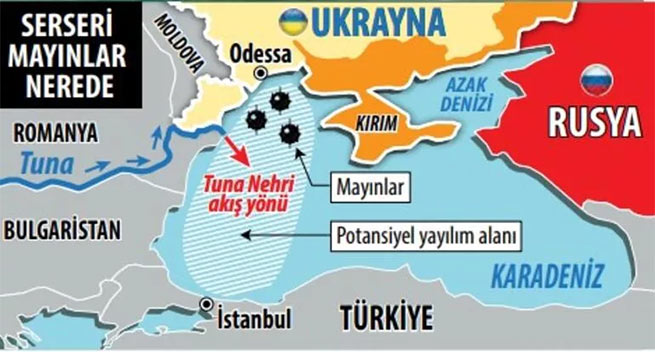 Turkey is seriously concerned about this problem

The Turkish news agency Hurriyet refers to a statement by Andrey Klimenko, director of the Institute for Strategic Black Sea Studies, who stated on social media: “A real threat at sea… Russia laid mines on proposed sea routes leading to Odessa from the Bosphorus and claimed they were Ukrainian mines. This is dangerous misinformation.”

Why the Russian Navy, which is about to attack, needed to plant defensive mines, Mr. Klimenko did not say, pointing out that “information about the number of mines can only be known by the one who laid the mines.”

What type of mines are used (according to Hurriyet)

– Naval mine type “YAM” began to be produced in the USSR during the Second World War. First used in the Gulf of Finland.

– The mine has a total weight of 172 kg and contains 20 kg of TNT-type explosives. It is placed in water to a depth of 1-2 meters. It works on the principle of contact, when detonated, the mine damages or sinks ships.

– River mine type “YARM”. These mines, produced during the Soviet period, weigh about 30 kg. The mass of the active explosive is about 3 kg. A mine that explodes on contact is fragmentary and is intended to destroy the enemy’s manpower.

– It is known that both types of mines are used by Russia and Ukraine.