For several days, while we did not publish news about fakes, their number increased many times over. At the same time, some European publications that have previously dealt with this topic have clearly received an ambiguous instruction to “talk less”.

Rebuttal: Embassy of the People’s Republic of China in Washington categorically refuted this information, stating that “the Chinese side has never heard of such appeals.”

This was reported to Reuters by Liu Pengyu, the official representative of the Chinese Embassy in the United States.

Information: Israel has joined the anti-Russian sanctions, according to Ukrainian telegram channels, citing Israeli Foreign Minister Yair Lapid. It is specified that the politician made such a statement on his Twitter page.

Rebuttal: There is no such statement on Yar Lapid’s official twitter. The head of the Israeli Foreign Ministry published a post with completely different words – that the country is ready to mediate a ceasefire and restore peace, as well as work together with the United States and European partners, and supply humanitarian assistance.

Israel will do everything it can to assist mediation efforts, to stop the shooting and restore peace. We are working together with our greatest ally, the United States, and our European friends, to prevent the continuation of this tragedy.

Add, previously Yair Lapid declaredthat the issue of sanctions against Russia is ambiguous, and Israel “will weigh its considerations in this regard.” Until now, Israel has not imposed its own sanctions on the Russian Federation.

Fake #19
The musicians of the orchestra of the Russian army were detained in St. Petersburg for performing anti-war songs. Ukrainian telegram channels write about this.

Refutation: Not only is the video staged, it is also filmed in 2015. The musicians performed the song Writing’s On The Wall from Specter, the new film about 007. The detention was nothing more than a prank, some even suggested that it was marketing campaign for the release of the James Bond film.

Fake 20: The Russian military massively refuse to participate in a special operation on the territory of Ukraine. About it wrote the Ukrainian edition of Guildhallphotos of reports with a refusal to continue work are distributed through Ukrainian telegram channels. 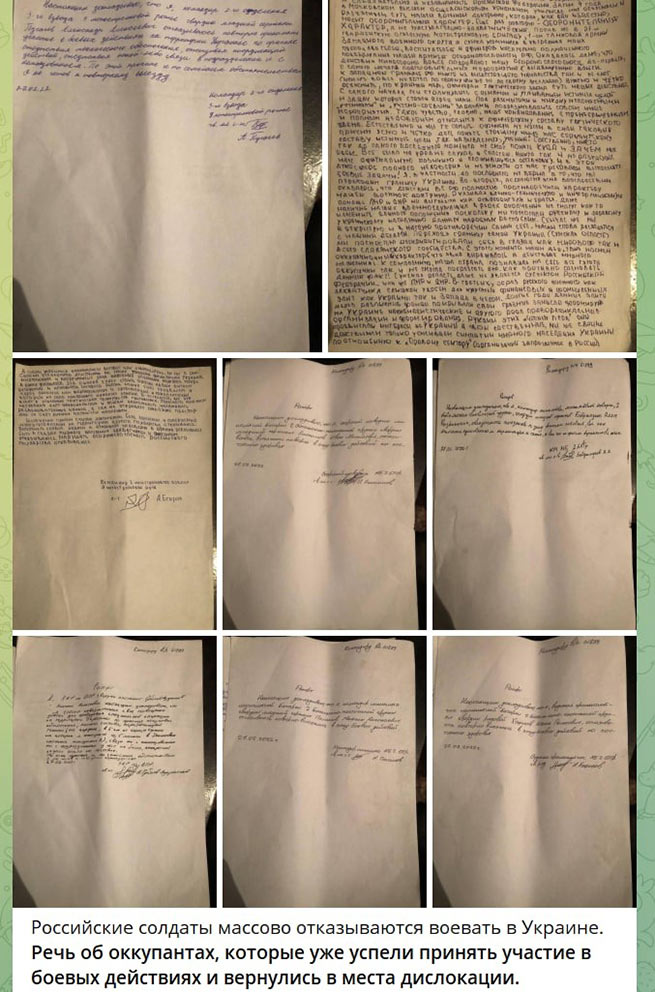 Refutation: This is fake, letters do not match Charter of the Armed Forces of Russia. In Russia, soldiers do not write a report to the commander of a military unit, they are given to the immediate commander or chief. Only the company commander can apply to the unit commander, and not an ordinary or even a senior lieutenant. This is regulated by article 21 of the charter.

All the reports indicate the request of the serviceman: I consider “it is impossible for me to re-departure to the combat zone”, despite the fact that they are dated February 27, that is, only on the third day of the special operation. It is unlikely that the fighters would have had time to enter the territory of Ukraine, return back and now prepare for a second “business trip”.

In the armed forces of the Russian Federation, a typical form of address to the commander: I ask you to release me from the performance of official duties (the reasons follow) and a reference to a specific paragraph of the law or order. The submitted reports are more like letters than a document made according to the regulations.

The armed forces do not have such full-time, that is, permanent, military formations as a battalion-tactical group.

A battalion tactical group (BGR) is a temporary formation of troops created for the period of a combat mission from several units. Therefore, there can be no full-time positions like the commander of a 2 BGR gun or the commander of a BGR platoon.

Fake 21: There is a shortage of sugar, buckwheat and other basic foodstuffs in Russia. 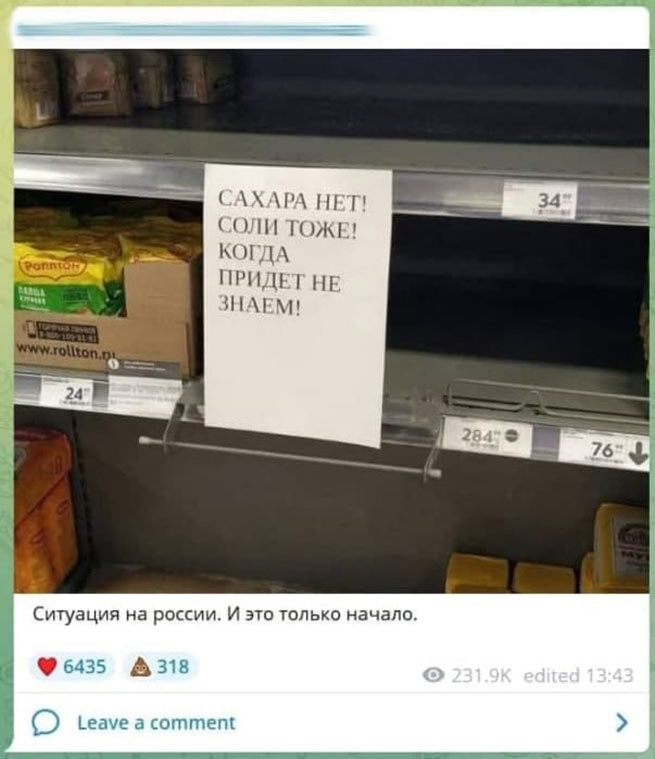 Rebuttal: There is no shortage, but frightened, including by the misinformation that Creo farms are spreading, people are making large stocks, buying sugar and buckwheat by the kilo.
At the same time, there is no need for this: 70 factories in Russia produce 6 million tons of products. In recent years, the overproduction of sugar has led to the formation of excess reserves (they will last for several years ahead).
Fake 22: The collective West does not wage an information war against Russia.

Rebuttal: President of Ukraine Volodymyr Zelensky on his Twitter personally thanked Meta Corporation (Facebook, Instagram, WhatsApp) and other platforms for their help in the information war.

War is not only a military opposition on UA ​​land. It is also a fierce battle in the informational space. I want to thank @Meta and other platforms that have an active position that help and stand side by side with the Ukrainians.

In addition to Meta, foreign consultants also help the Ukrainian side.

Well-known Polish production companies are currently working in Ukraine, as well as a well-known Hollywood figure, actor and director Sean Penn with a film crew. He also met with Zelensky.

The results of the joint work can already be seen here.

However, our readers in Greece can see for themselves. It is enough to open local information sites or turn on the TV.
Fake 24:
The Minister of Defense of the Russian Federation retroactively dismissed all Russian officers who inflicted fire damage on the civilian infrastructure of Ukraine. The order of Sergei Shoigu is distributed by Ukrainian telegram channels.

Rebuttal: The document is fake. The first paragraph does not specify the article of the federal law “On military duty and military service“, only paragraph (we are talking about Article 51, paragraph e.2)

The stamp of the Ministry of Justice is exactly the same as that found in the Internet, is the first result in the search. There is no order in the Ministry’s database that would registered under that number. Moreover, the last number under which the document was registered in the Russian Ministry of Justice is 67596, respectively, the number 98753 is still very far away. Orders for personnel are drawn up differently, they are classified as “secret” and do not pass registration with the Ministry of Justice.
Well, the last argument – in Russia, the initials of the name and patronymic are always indicated (that is, S.K. Shoigu). In Ukraine, the middle name is not indicated in the documents – the source of the fake is clear.
Fake 25: The Russian military blocked the path of an ambulance with a pregnant woman. “An 18-year-old Ukrainian woman from Balakliya went into labor, but the Russian military did not let the doctors through the checkpoint to see her,” writes Anton Gerashchenko, adviser to the Ministry of Internal Affairs of Ukraine.

Rebuttal:
The armored personnel carriers in the photograph are not Russian, but Ukrainian. It is worth looking closely at the photo and seeing the Ukrainian camouflage – “pixel”, which is used only by the Armed Forces of Ukraine. Last time, a similar mistake was made by the deputy of the Verkhovna Rada A. Goncharenko, calling the burnt equipment Russian.
Fake 26: A flash mob from the Armed Forces of Ukraine: the bodies of the dead Russian soldiers posted the letter Z. This news is spreading in Ukrainian telegram channels. 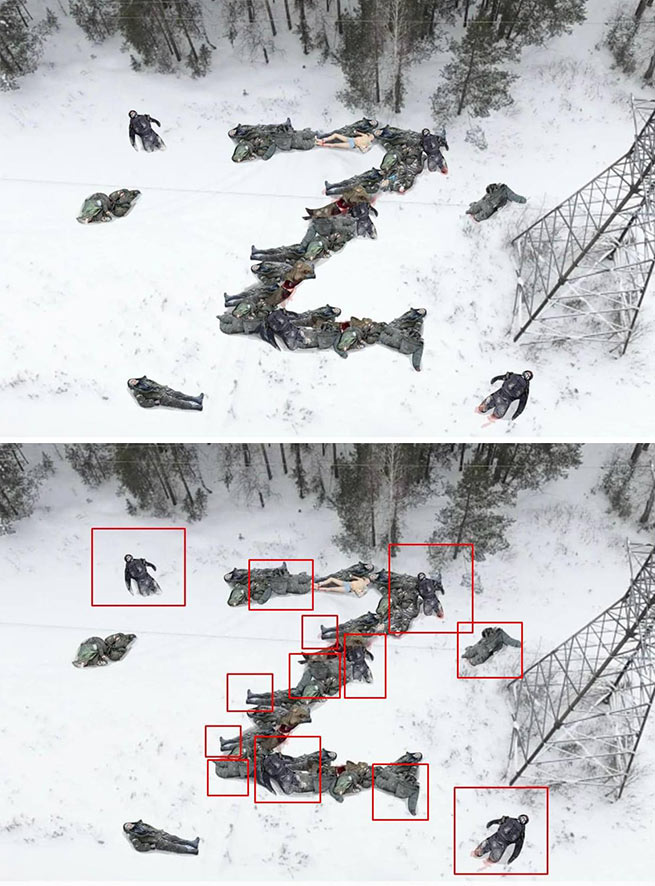 Rebuttal: In the photo – mannequins. If you look closely at the image (marked in red), you can see that the “bodies” have the same poses. The picture was made with the help of a graphic editor – another provocation of Ukrainian technologists. By the way, the original source of the photo has already realized the failure of the stuffing and deleted the post.
Fake 27: In Mariupol, doctors could not save the wounded girl – the child died in intensive care.
The footage has already been posted online.
Refutation: A professionally edited video raises many questions. 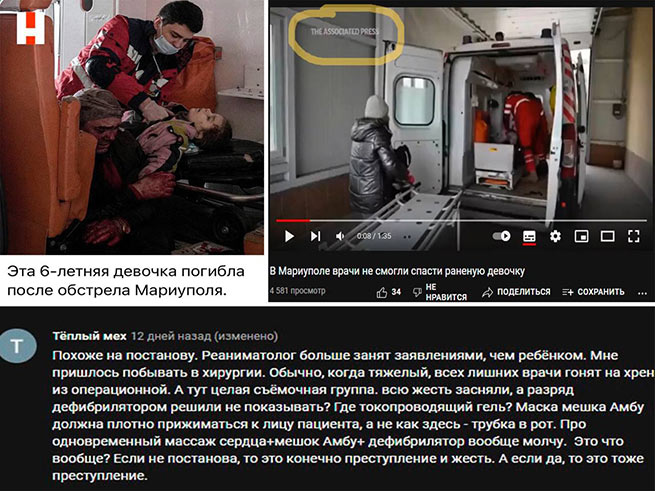 Why the child was transferred from one gurney to another is not at all clear. Bedridden patients, at least to the emergency department, are transported on an ambulance gurney, this is an accepted standard.

The wounded child should have been intubated immediately and put on the operating table, and not taken to intensive care. The girl has a wound in the chest, but when she is transferred to a gurney at the beginning of the video, the blood is no longer visible on the jumper.

Resuscitation measures should have begun in the ambulance. But when the girl is transferred, she has neither an infusion system (“dropper”), nor bandages. And for some reason, no one does heart massage with artificial ventilation at this moment either.

There are too many people in the room – 9 people, but according to the instructions, except for the medical staff of the hospital, they should not let anyone in. Especially the operator. The doctor’s behavior is extremely strange: he should be busy saving the girl’s life, instead the doctor bursts into curses against Russia. All this was filmed from several angles, it feels like a person with a camera was specially expected.

The moment with the defibrillator is very incomprehensible: the discharge itself was not removed, the conductive gel was not applied. The Ambu bag mask should be pressed tightly against the patient’s face, only the tube in the mouth is visible in the frame. Simultaneous heart massage + Ambu bag + defibrillator violates all medical protocols. Doctors perform indirect heart massage according to the “infant technique” – with the thumbs. At the age of a girl, it makes no sense.

Finally, the name and surname of the girl have not yet been published, which absolutely excludes the possibility of verifying the authenticity of the entire story on the video. We add that the original video was filmed by The Associated Press, where Yevgeny Maloletka, already known to us, works, who previously became famous for a fake related to the shelling of the Mariupol maternity hospital.

We also recall that a large number of such videos during the Syrian conflict were released by the White Helmets movement. Most of them ended up being productions with the involvement of actors.