Western Russophobic hysteria is now in full swing. German political culture, heir to the most totalitarian system the world has ever known, has led to a recent

As a German Jewish activist friend recently told me, this incident is not entirely unrelated to the dismissal of German Jewish musicians in 1933, as well as German Christian musicians for refusal support National Socialism, and that was before the Nuremberg Laws of 1935.

A few weeks ago, the German state publication Deutsche Welle was purge of Arab staffwho expressed critical views on Israel – views that in fiercely pro-Israeli Germany are identified as “anti-Semitic”.

In Italy, whose political culture is also the heir of fascism, Dostoevsky’s university course was suspended in the name of a new Russophobia, but under pressure later restored. US video game giant EA Sports removed Russian teams from its FIFA video game series.

Ruosphobia did not appear yesterday. Caricature from the American magazine Puck (“Naughty”) 1903. Russia at the “Court of World Contempt”. The spirit of civilization presides

The Russophobic campaign spans the entire Western political spectrum and is fully supported by Western liberals and cultural elites. I have always been shocked by the political credulity of the majority of the population of the United States and Western Europe. Ever since I came to the US to attend university in 1982, I couldn’t believe how gullible my American peers of all races were in their unshakable belief that whatever their government or corporate media says, especially about other countries is the absolute truth.

Growing up in Jordan under an authoritarian regime, I have learned, like many Jordanians, to have very little faith in what the government or the media say. I remain partial to the idea that authoritarian regimes instill democratic skepticism in their populations, while Western liberal “democratic” regimes encourage complete obedience to the “Ministry of Truth,” as George Orwell called it.

Add to this the mob mentality and the prevailing rejection of opinions opposed to the prevailing beliefs in most Western countries, and the situation is not unlike the fascist culture of many European countries during the interwar period. 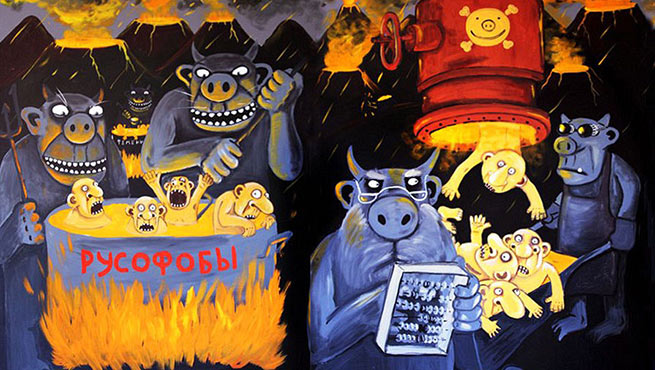 None of this is surprising. In the United States, Americans shot in large numbers dachshunds, were stoned and trampled in the streets during World War I because of their German ancestry. The American campaign was launched against beer, as a German drink, claiming that it is “unpatriotic” to drink it. The Americans even renamed sauerkraut in the “cabbage of freedom”.

This is in addition to the fact that German Americans and German residents of the US were placed in concentration camps (called “internment camps” in official jargon) during the First and Second World Wars.

In the 1970s and 1980s, jingoism in the US was at an all-time high, with incessant racist attacks on Japan for allegedly undermining the US economy. There were widespread campaigns to boycott Japanese cars and electronics, with some accusing the Japanese of committing ” economic Pearl Harbor and warned that the “yellow peril” was back (it should be remembered here that Japanese Americans and Japanese residents of the US were sent to concentration camps during World War II and their property was confiscated by the US government). 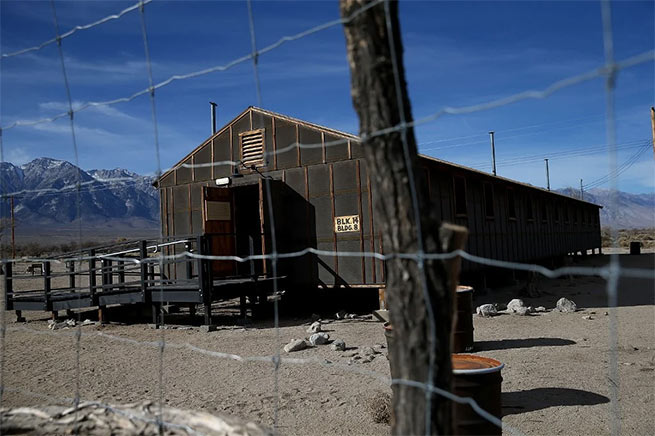 Replica of the Japanese internment camp in California (AFP)

In 1982 two white menwho worked in the auto industry beat a Chinese American to death, apparently mistaking him for a Japanese. Two killers were fined $3,000 and served no jail time. Representatives of the US Congress even used sledgehammers to destroy products Toshiba in front of the Capitol – and that was during the era of President Ronald Reagan, long before Donald Trump and Joe Biden.

After the Iranian Revolution, racist attacks and persecution Iranians or those they mistook for them (like I was white fraternity boys a week after my arrival in the US) were on the agenda in the US. Anti-Iranian poster hanging in barbecue restaurant in Houston, Texassince 1979, showcasing a reenactment of a lynching that captured the attention of fans as far back as 2011 year.

Islamophobia reached unprecedented proportions in the US and Europe after 11 Septemberwhen as a result of one of first racist attacks a Muslim victim, an Egyptian Christian, and a Sikh man, who were apparently mistaken for Muslims, perished.

When France refused to support the US imperial invasion of Iraq in 2003, American restaurateurs began throwing away French wine and bottling ” target=”_blank” rel=”noopener noreferrer”>bottle contents on the streets. Congress was also a pioneer in this regard when canteen of Congress renamed “french fries” to “freedom fries”.

In the current atmosphere, the same theatrical youth of US political culture appears in giving up Russian vodka and even in the boycott of Russian American owned restaurants. Spotify closed their Moscow offices, and IKEA closed their Russian shops. Glasgow Film Festival stripped off two Russian films, and the Minister of Culture and Tourism of Greece canceled ballet “Swan Lake”. 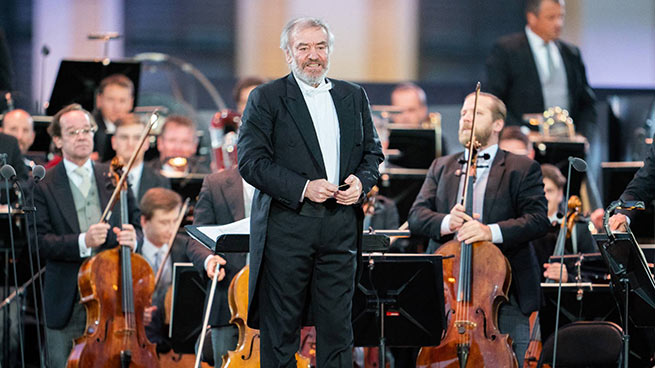 Not to be outdone, New York Metropolitan Opera announcedwhich terminates cooperation with the Moscow Bolshoi Theater and breaks off relations with an opera singer Anna Netrebkoand the Venice Biennale removed a Russian pavilion amid a flurry of boycotts of Russian cultural products.

And if German dogs had to be killed in the US during World War I, the French-based International Cat Federation has just banned Russian cats participate in competitions. Lithuania has reached the point where stopped deliveries of Covid vaccines in Bangladesh as punishment for the latter’s decision to abstain from a UN vote condemning Russia’s interference.

If the West were not so hypocritical about which countries can be boycotted quickly and which cannot, an official boycott of Russia could be an important political act, including the cancellation of state visits, joint military exercises, refusal of official invitations to events sponsored by by the government, the cancellation of invitations to Russian civil servants to perform in private or public institutions, etc. However, it is impossible to boycott Dostoevsky, vodka and Russian musicians.

To impose on Russian musicians litmus papers to save your jobs in German orchestras, smacks of nothing less than totalitarianism. Just think about how controversial the boycott not of Israel but of its illegal colonies in the occupied territories has been over the past two decades and you get the picture.

Vladimir Lenin in the early 1920s criticized some Russian communists for their weak support for the rights of many non-Russian peoples inhabiting Russia, saying: “Scratch some [русских] Communists, and you will find Great Russian chauvinists.”

Since the ongoing Russophobic campaigns have united Western conservatives and liberals in the US and Europe, I can safely say that if you scratch many white liberals, you will most likely find a white supremacist, Cold War warrior. 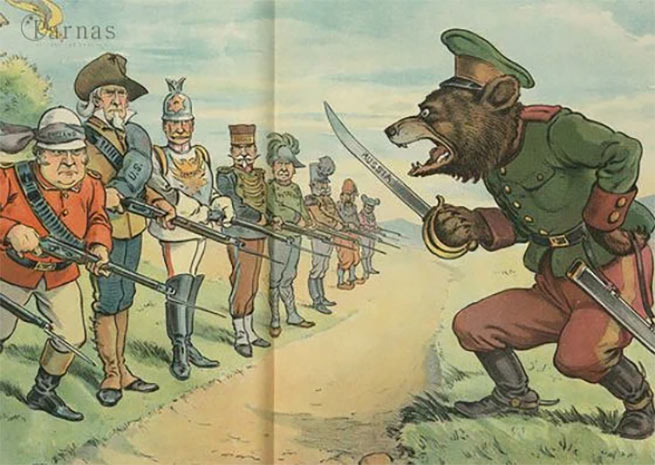 Recent despicable and vile Russophobic actions show that the youthful nature of American or Western European political culture under fascism or liberalism is not so different when it comes to heaps of racist contempt and fabricated fantasies of chosen enemies.

This also applies to the western academy. Sovietologya right-wing academic discipline that emerged in the 1950s promoted second-rate theories about Soviet “anti-democratic” culture as Russian mothers swaddle tighter their babies than in other countries, which allegedly took root in them, causing a love of political restrictions. Arabs and Muslims western academy and media they have been telling us for decades and continue to tell us that they love dictators and violence because it is part of their religion and culture.

In 2000, together with Edward Said, I organized a large literary conference, to which we invited 40 world famous writers, including 20 writers and poets from the Arab world. The conference was funded by a private American cultural foundation and was to be held at Columbia University, where Said and I taught.

A few weeks before the start of the conference, the September 11 attacks took place. The anti-Arab and anti-Muslim hysteria that swept the US after the attacks greatly worried the sponsor and the university about security issues and fears that the conference would be bombed by US anti-Arab fanatics. As the university’s security requirements increased, the Cultural Foundation’s concern about security threats grew. The conference, which had been in preparation for two years, was cancelled. 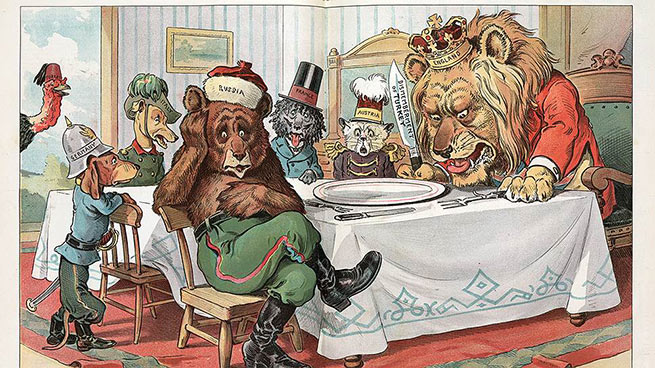 British cartoon of the period of the Crimean War / JS Pughe

The irony that Western mainstream political and popular culture is the most conformist and devoid of dissent, except on issues on which Western elites themselves disagree, persists in the face of Western propaganda notions that the liberal West is the place where “the hundred colors”. Unless, of course, they flourish in a direction contrary to the political mantra uttered by governments and corporate media, in which case the Western mafia is unleashed.

A few decades ago, Noam Chomsky analyzed how Western consent production for the production of a servile population was achieved. If the current Western hysteria is any indication, little has changed in the intervening years.

The views expressed in this article are those of the author and do not necessarily reflect the editorial policy of Athens News.

Joseph Massad is Professor of Contemporary Arab Politics and Intellectual History at Columbia University in New York. He is the author of many books, scientific and journalistic articles. His books include Colonial Effects: The Making of a National Identity in Jordan; Wishing Arabs; The Persistence of the Palestinian Question: Essays on Zionism and the Palestinians, and more recently on Islam in Liberalism. His books and articles have been translated into dozens of languages.