The city of Ouranoupoli in Halkidiki, whose name literally translates as “Heavenly City”, is a unique destination that has acquired its own logo, trademark of a commercial and tourist network.

The mark (trade mark) is a “sign” of the tourism model “Mediterranean Summer”, as the destination promotes, in addition to alternative forms of tourism, summer holidays throughout the territory of Eastern Chalkidiki (Ανατολικής Χαλκιδικής), writes the publication grtimes.gr.

With a mosaic borrowed from the trademark of Halkidiki and colors taken from the corresponding logo of the municipality of Aristotle, the new Ouranoupoli badge lends color to a thematic motif: the “sun” surrounded by Aegean blue.

The Ouranoupolis logo will accompany all campaigns of the municipality of Aristotle that concern it as a destination, whether they are addressed to the European tourism market or the domestic one. Thus, it is expected that companies that display it on signs, printed publications, e-brochures, etc., adopting this modern and innovative promotion policy, will take precedence in the preferences of travel agents and the public throughout Europe.

Its pilot presentation is included in the online campaign (social media) of the municipality of Aristotle, which will take place next month and will be about sailing and diving, addressed to the tourism market of Piedmont in Northern Italy (Turin).

The official presentation will take place in Ouranoupolis ahead of the tourist season. Until then, a number of companies are expected to replace the pre-existing markings and inscriptions so that, year after year, the first Greek destination with unified markings is created in the municipality of Aristotle.

The city of Ouranoupoli takes its name from the ancient Ouranoupolis (Greek heavenly city), built by Alexarchus, brother of King Cassander, in 315 BC. on the ruins of an even more ancient city of Sani. Ouranoupoli, which, according to Strabo, had a perimeter of 30 stadia, was not far from Tripiti and had nothing to do with today’s settlement. Distance from Thessaloniki 135 km.

The modern city of Ouranoupoli was formed on the site of a former courtyard, as a result of the arrival of Greek repatriate refugees from Asia Minor, on a site that belonged to the Athos monastery of Vatoped since the 13th century.

Today the city is the main pier from which ships leave for the monastic republic. Saint Athos. In addition to its beautiful beaches, Ouranoupoli provides visitors with the opportunity to stroll through an area rich in history and enjoy various sights.

One of them is a tall, imposing Byzantine building, the Prosphoria Tower, built in 1344 on the site of the courtyard of the Athos Vatopedi Monastery, very well preserved and a symbol of Ouranoupoli. The roof that replaced its top floor and a lower building nearby are 19th century buildings. Other buildings have been preserved from the old monastery courtyard. In the east, almost on the border with the monastic republic, rises the Frankish Castle (Zigou Monastery). 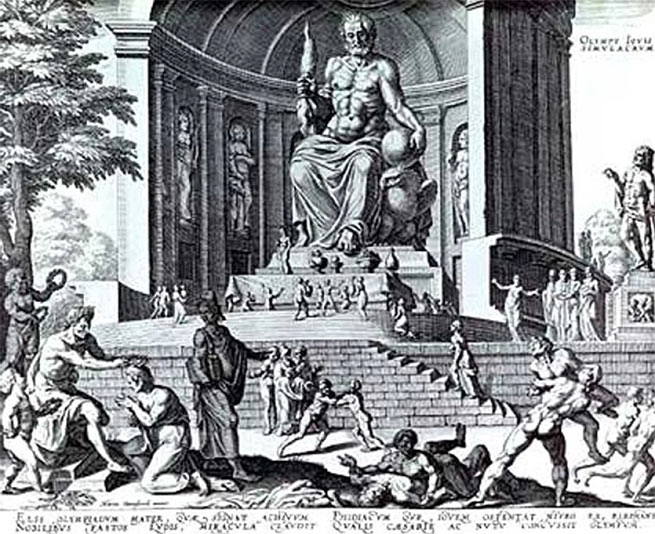 The history of the famous statue of Olympian Zeus, reconstructed after 2.5 millennia

Flying over the ancient temple of Poseidon in Sounio