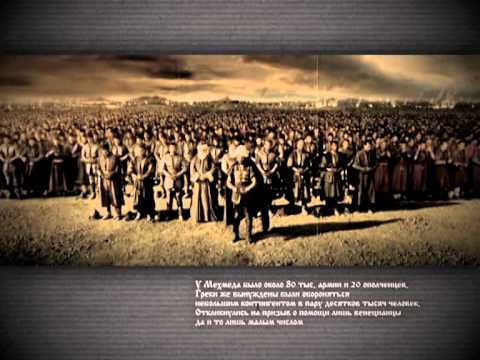 May 29 is a tragic, mournful date in the historical calendar of the Greek nation, Orthodoxy, and world history. 566 years ago, on May 29, 1453, under the pressure of the 150-thousandth army of Sultan Mehmet II, Constantinople (Polis) fell, defended by less than 10 thousand of its defenders.

Few facts of world history have caused such a large number of responses and even detailed narratives from contemporaries and descendants as the fall of the Byzantine (Greek) Empire and the conquest of Constantinople by the Turks on May 29, 1453.
… This event turned out to be not only the most important in the political and military history of Europe, but, using the common modern term, it was significant. When on Tuesday, May 29, 1453, hordes of Turks through a gap in the wall broke into the “royal city”, “new Rome” (as the Byzantines called their capital) and scattered around the city, hardly anyone of them thought about anything other than looting and robbery. But for the Byzantines and residents of other Christian states, it was a cosmic catastrophe. The fall of Constantinople symbolized the end of the thousand-year history of the main Orthodox power, almost the end of the world, at best the beginning of a new and completely different, worse era. After all, something better did not come to replace the Byzantine (Greek) civilization.

… Since the fall of Constantinople, a tragic date for every Greek, for 565 years, our, all the Greeks of the world, the words: “See you in Constantinople” became our greetings.
Sooner or later, this meeting will come true!

… Every year on this day since the time when I turned 18, tragic pictures of the last day of the fall of Constantinople and the Byzantine (Greek) Empire grow into me. A story of unparalleled heroism and betrayal, retribution for the Florentine schism. The Greeks angered the Lord! For their disunity and vanity.
… We have lost our Motherland, our main city of all Greeks in the world, which for us is undoubtedly Polis –
Constantinople. … We’ll be back. Sooner or later it will be !!! … See you in Constantinople. Θα βλεπόμαστε στην Κωνσταντινούπολη.

On May 29, early in the morning, the last assault on Constantinople began. The first attacks were repulsed, but then the wounded Giustiniani left the city and fled to Galata. The Turks were able to take the main gate of the capital of Byzantium. Fighting took place in the streets of the city, Emperor Constantine XI fell in the battle, and when the Turks found his wounded body, they cut off his head and put him on a pole. For three days there were robberies and violence in Constantinople. The Turks killed in a row everyone they met on the streets: men, women, children. Streams of blood flowed down the steep streets of Constantinople from the hills of Petra to the Golden Horn.

The Turks broke into monasteries and monasteries. Some young monks, preferring martyrdom to dishonor, threw themselves into wells; monks and elderly nuns followed the ancient tradition of the Orthodox Church, which prescribed not to resist.

The houses of the inhabitants were also looted one by one; each group of robbers hung out a small flag at the entrance as a sign that there was nothing to take in the house. The inhabitants of the houses were taken away along with their property. Everyone who fell from exhaustion was immediately killed; they did the same with many babies.

Scenes of mass abuse of shrines took place in churches. Many crucifixes, adorned with jewels, were carried out of the temples with Turkish turbans dashing on them.

In the temple of Chora, the Turks left intact the mosaics and frescoes, but destroyed the icon of Our Lady of Hodegetria – the most sacred image of it in all of Byzantium, executed, according to legend, by Saint Luke himself. It was brought here from the Church of the Virgin near the palace at the very beginning of the siege, so that this shrine, being as close to the walls as possible, would inspire their defenders. The Turks pulled the icon out of the setting and split it into four parts.

But how contemporaries describe the capture of the greatest temple in all of Byzantium – the Cathedral of St. Sofia. “The church was still filled with people. The Holy Liturgy had already ended and Matins was going on. When noise was heard outside, the huge bronze doors of the temple were closed. The crowd inside prayed for a miracle that alone could save them. But their prayers were in vain. time, and the doors collapsed under blows from the outside. The worshipers were trapped. A few old people and cripples were killed on the spot, most of the Turks tied or chained to each other in groups, and as shackles were used scarves and scarves torn from the women. girls and boys, as well as richly dressed nobles were almost torn to pieces when the soldiers who captured them fought among themselves, considering their prey. The priests continued to read prayers at the altar until they were also captured … “

Mehmed the Conqueror enters Constantinople. Fragment of a painting by Fausto Zonaro.

Sultan Mehmed II himself entered the city only on June 1. With an escort of a select group of the Janissary Guards, accompanied by his viziers, he rode slowly through the streets of Constantinople. Everything around, where the soldiers had been, was devastated and devastated; churches were desecrated and plundered, houses – uninhabited, shops and warehouses – broken and taken apart. He rode on horseback into the church of St. Sophia, ordered to knock down the cross from her and turn it into the world’s largest mosque.

Cathedral of st. Sofia in Constantinople

Immediately after the capture of Constantinople, Sultan Mehmed II first of all issued a decree “granting freedom to all who survived”, but many residents of the city were killed by Turkish soldiers, many became slaves. For the early restoration of the population, Mehmed ordered the transfer of the entire population of the city of Aksaray to the new capital.

The Sultan granted the Greeks the rights of a self-governing community within the empire; the community was to be headed by the Patriarch of Constantinople, responsible to the Sultan.

In subsequent years, the last territories of the empire were occupied (Morea – in 1460).

The consequences of the death of Byzantium

Byzantium had great authority as the homeland and support of Orthodoxy, the eastern branch of the Christian religion.

Most Europeans believed that the death of Byzantium was the beginning of the end of the world, since only Byzantium was the successor to the Roman Empire. Many contemporaries blamed Venice for the fall of Constantinople (Venice then had one of the most powerful fleets). The Venetian Republic was playing a double game, trying, on the one hand, to organize a crusade against the Turks, and on the other, to protect its trade interests by sending friendly embassies to the Sultan.

However, you need to understand that the rest of the Christian powers did not lift a finger to save the dying empire. Without the help of other states, even if the Venetian fleet had arrived on time, it would have allowed Constantinople to hold out for another couple of weeks, but this would only have prolonged the agony.

Rome was fully aware of the Turkish danger and understood that all Western Christianity could be in danger. Pope Nicholas V called on all Western powers to jointly undertake a powerful and decisive Crusade and intended to lead this campaign himself. From the moment the fateful news came from Constantinople, he sent out his messages, calling for active action. On September 30, 1453, the Pope sent a bull to all Western sovereigns announcing the Crusade. Each sovereign was ordered to shed his blood and his subjects for a holy cause, and also to allocate a tenth of his income to it. Both the Greek cardinal – Isidore and Vissarion – actively supported his efforts. Vissarion himself wrote to the Venetians, simultaneously accusing them and begging them to end the wars in Italy and to concentrate all their forces on the fight against the Antichrist.

However, no Crusade ever happened. And although the sovereigns eagerly caught messages about the death of Constantinople, and the writers composed sorrowful elegies, although the French composer Guillaume Dufay wrote a special funeral song and sang it in all French lands, no one was ready to act. King Frederick III of Germany was poor and powerless, since he did not have real power over the German princes; neither from the political nor from the financial side, he could not participate in the Crusade. King Charles VII of France was busy rebuilding his country after a long and devastating war with England. The Turks were somewhere far away; he had better things to do in his own home. England, which suffered even more than France in the Hundred Years War, the Turks seemed an even more distant problem. King Henry VI could do absolutely nothing, since he had just lost his mind and the whole country was plunged into the chaos of the wars of the Scarlet and White Rose. None of the kings showed their interest, with the exception of the Hungarian king Vladislav, who, of course, had every reason for concern. But he had a bad relationship with his army commander. And without him and without allies, he could not dare to undertake any venture.

Thus, although Western Europe was shocked to find a great historic Christian city in the hands of the infidels, no papal bull could spur it on. The very fact that the Christian states failed to come to the aid of Constantinople showed their obvious unwillingness to fight for the faith if their immediate interests were not affected.

The Turks quickly occupied the rest of the empire as well. The Serbs were the first to suffer – Serbia became a theater of military operations between the Turks and the Hungarians. In 1454, the Serbs were forced, under the threat of force, to give the Sultan part of their territory. But already in 1459 the whole of Serbia was in the hands of the Turks, with the exception of Belgrade, which until 1521 remained in the hands of the Hungarians. The neighboring kingdom of Bosnia was conquered by the Turks 4 years later.

Meanwhile, the last remnants of Greek independence gradually disappeared. The Duchy of Athens was destroyed in 1456. And in 1461 the last Greek capital, Trebizond, fell. This was the end of the free Greek world. True, a certain number of Greeks still remained under Christian rule – in Cyprus, on the islands of the Aegean and Ionian Seas and in the port cities of the continent, still held by Venice, but their rulers were of a different blood and a different form of Christianity. Only in the southeast of the Peloponnese, in the lost villages of Maina, into the harsh mountain spurs of which not a single Turk dared to penetrate, was there a semblance of freedom.

Soon all the Orthodox territories in the Balkans were in the hands of the Turks. Serbia and Bosnia were enslaved. Albania fell in January 1468. Moldova recognized its vassal dependence on the Sultan back in 1456.

“Mehmed II at the walls of Constantinople”

Many historians in the 17th and 18th centuries. considered the fall of Constantinople a key moment in European history, the end of the Middle Ages, just as the fall of Rome in 476 was the end of Antiquity. Others believed that the mass exodus of the Greeks to Italy caused the Renaissance there.