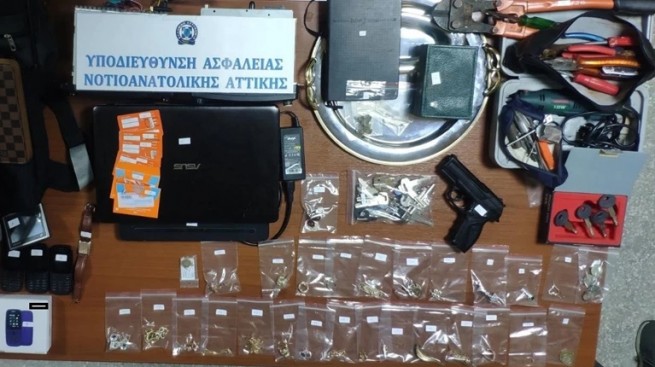 By the decision of the Athens Prosecutor’s Office, the identification data and photographs of four (4) people were published, who were identified as citizens of Georgia or Ukraine, members of a gang that systematically carried out burglary from houses and apartments in various areas of Attica…

The criminal group, whose members systematically committed burglaries and burglaries in various areas of Attica, was eliminated by the South East Attica Security Directorate.

During the search, the members of the gang were found: master keys, tools for breaking and a pistol.

According to the investigation, the aforementioned suspects, since at least February 2021, have created and joined a criminal group, which, changing, changing its composition in each case, committed many burglaries in various areas of Attica.

The police explain the double data by the fact that the leader, who was identified as KASATONOV or LOMSADZE or SITCHINAVA, performed an operation to destroy fingerprints on both hands (papillary pattern), as well as the left palm.

Specific disclosure, pursuant to the relevant Prosecution Order, seeks to protect society as a whole from the criminal activities of the accused, to facilitate the investigation of any commission and other such acts, and to facilitate the satisfaction of the State’s criminal claim. for the commission of crimes, as the defendants committed thefts as part of a criminal group and against many victims in a manner that would demonstrate their particular danger to public safety, as well as to identify and investigate unspecified cases of such thefts by victims of physical surveillance by the police.

It is noted that the specific disclosure will last until 12.00 on 26-10-2021, according to the order of the prosecutor’s office. After this period, the storage and / or reproduction of the publication of the above data is prohibited and contrary to the law.