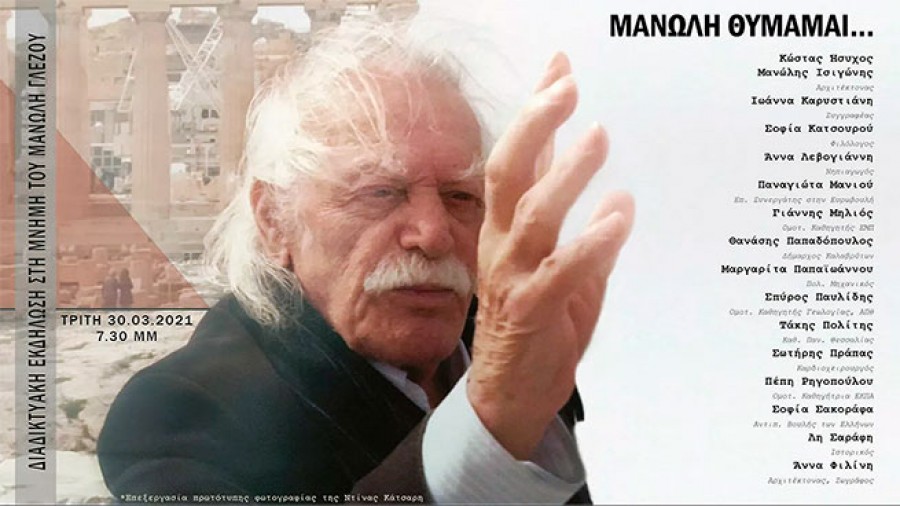 A year has passed since death of Manolis Glezos, a man whom General de Gaulle called “the first partisan of Europe”, since it was he and Lakis Santas who carried out the first high-profile action of resistance in Europe, lowering the German flag from the Acropolis. The online event was organized in his memory “so that the memory candles are not extinguished.” “A year has passed … A year, and it’s like yesterday, that he left and left a hole in our life, but not in our hearts and in our memory. An implacable fighter for freedom, democracy and social rights, a defender of the law of the weak and our people, an active citizen, tireless and always present, who “instead of spending his life with courage for a moment, sowed it for centuries,” among other things, says organizers’ statement. The online conference, which takes place on Tuesday 30/3 at 19:30, is attended by: Kostas Isyhos, politician, former minister Manolis Isigonis (architect, Paros) Ioanna Karistiani (writer) Sofia Katsuru (philologist) Anna Levojanni (kindergarten teacher , musician) Panayota Maniou (Assistant Member of the European Parliament) Yannis Milios (NTUA Professor) Tanasis Papadopoulos (Mayor of Kalavrita) Margarita Papayoannou (Civil Engineer, London) Spyros Pavlidis (Associate Professor, AUTh) Takis Politis (Professor, University of Thessaly) Sotiris Prapas (doctor) Pepi Rigopoulou (EKPA professor, writer) Sofia Sakorafa (Deputy Speaker of the Greek Parliament) Li Sarafi (historian) Anna Filini (architect, artist)

In 2020, “Russian Athens”, together with a group of enthusiasts, translated the program of the Greek channel ET1 with the host Fredi Germanos, in which Manolis Glezos and Apostolos Santos tell in detail how they removed the German flag from the Acropolis, where they put it, and also what happened later.

A stunning broadcast from the Greek channel ET1 with the host Fredi Germanos, in which Manolis Glezos and Apostolos Santos tell in detail how they removed the German flag from the Acropolis, where they put it, and also what happened next, now with Russian subtitles. The program was filmed in 1981 and aired for the first time in 1982 as part of the show “Front page”, Greek TV channel ET1 Two heroes of the National Resistance recall the events that preceded that historic night, explain how the idea to rip the Nazi flag from the Acropolis arose, describe the route and the obstacles they faced, as well as their feelings when they finally managed to climb the rock of the Acropolis. “We felt that we were descendants of our great ancestors,” says Apostolos Santas excitedly. “It just got our attention. It belongs to our people, our people,” adds Manolis Glezos. However, they also discover unknown backstories of that night, such as their meeting with the police officer Panagiotis Vutopoulos, who, although he realized the next day who the young people he met, did not betray their secret. The program also includes Antonis Moshovakis, who recalls his meeting with Manolis Glezos and Apostolos Santos the day after the operation to remove the flag, and Kostas Mikruleas, who recalls how hard it was for his father, Prosecutor Elias Mikrouleas, from whom the German authorities urgently demanded find “intruders” in order to transfer it to the Germans, who were to execute the perpetrators. The program features audio-visual and photographic materials from the first hours of the German occupation of Athens on April 27, 1941, the Battle of Crete, as well as press reports, and the last free speech by Kostas Stavropoulos, which was broadcast on the Athenian radio station on the day the invaders were preparing to enter Athens. Dedicated to the memory of Manolis Glezos, Apostle Santos and all the fighters of German Nazism. Subtitle translation: Anna Erottopoulou Victoria Yavorskaya Georgios Charalampidis Lina Sonidou Subtitle editing: Pavel Onoyko Editor: Pavel Onoyko Russian Athens 2020