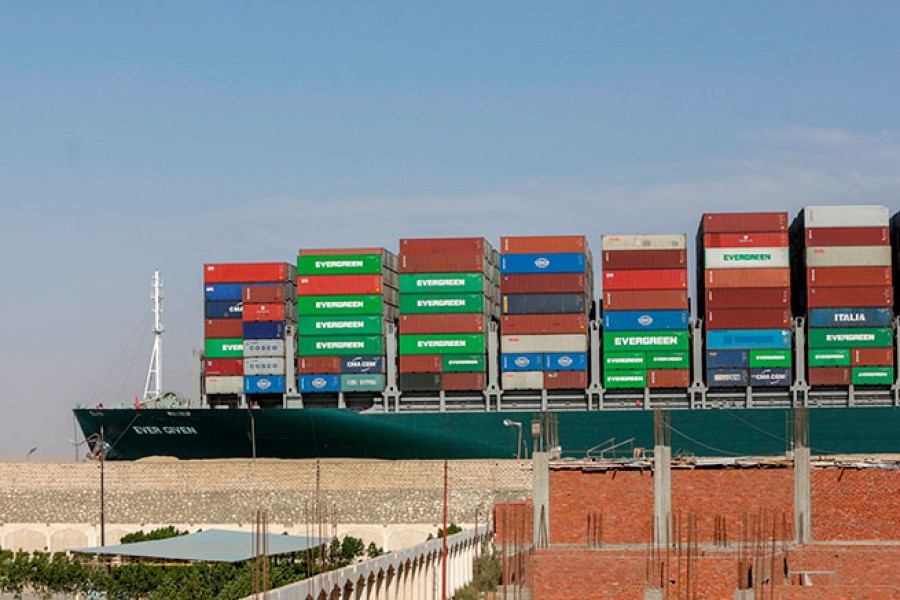 The giant freighter blocking the Suez Canal was torn from the coastline and finally released on Monday, raising hopes that one of the world’s most important shipping routes will quickly recover from the disaster that paralyzed billions of dollars in global trade.

Over the course of several hours, other ships, waiting for almost a week for transit on the 120-mile waterway that connects the Mediterranean and Red Seas, fired their engines and set off again.

Rescue teams, working on land and on water for six days and nights, ultimately received help from forces more powerful than any vehicle that rushed to the scene: the moon and the tides.

The quarter-mile long Ever Given was released at around 3:00 pm, according to the shipping company.

BREAKING: the ship is really moving now and horns are blaring in what sounds like celebration.

The stern has swung away from us and it looks like it’s really facing the right way now after hours of being jackknifed across the channel. pic.twitter.com/gTuvqWO5ta

“We did it!” Peter Berdowski, CEO of Royal Boskalis Westminster, a Dutch maritime rescue company hired by the ship’s owner, said in his statement.

Egyptian President Abdel Fattah el-Sisi noted this moment on Twitter, writing that “the Egyptians today managed to end the crisis related to the stuck ship in the Suez Canal, despite the great difficulties surrounding this situation in all aspects.”

Early Monday morning, the Eternal Tree’s stern was clearly dry, but several hours passed before it became clear that the bulbous bow of the ship had been successfully lifted from the mud and manure along the bank of the canal.

The rescue teams worked on a schedule largely dictated by the tides to make the six hours of progress it would take to get the water from low to high.

The full moon on Sunday gave rescuers a particularly promising 24-hour window to work with, and a few extra inches of tidal flow provided vital relief.

Throughout Sunday and Monday night, the tugs worked with dredgers to bring the 220,000-ton vessel back to water. Then, just before dawn, the ship slowly regained its buoyancy.

It was a turning point in one of the largest and most intense rescue operations in modern history, with the smooth running of the global trading system on the balance sheet.

An army of machine operators, engineers, tug captains and other rescuers knew they were fighting against time. Each day of blockages brings global supply chains one more day closer to a full blown crisis.

Ships packed with goods from all over the world, including cars, oil, livestock, and laptops, usually pass through the canal easily, supplying much of the globe as they cross the fastest route from Asia and the Middle East to Europe and the east coast of the United States.

Fearing that the rescue operation could take weeks, some ships decided not to wait, turning to make the long voyage around the southern tip of Africa. A journey that can add weeks to the journey and over $ 26,000 a day in fuel.

Workers on the canal celebrated every progress in the ship’s movement over the weekend with the roar of tugs whistling and shouts of joy that often echoed in the darkness of the desert.

Bernhard Schulte Shipmanagement, which oversees the ship’s operations and crew, said 11 tugs had helped, and two of them joined the fight on Sunday. Several dredgers, including a specialized dredger capable of extracting 2,000 cubic meters of material per hour, have dug in the bow of the vessel, the company said.

The diving teams examined the hull throughout the operation and found no damage, officials said. After liberation, the ship was subject to re-inspection.

With the help of the flotilla, the ship was towed north to Bolshoy Gorky Lake, the widest part of the canal, so that it could be further surveyed, and therefore the delayed movement could someday smoothly develop the stream.

Leth Agencies, a transport provider specializing in canal passages, tweeted that after Ever Given was now safely removed from the road, 43 other vessels awaiting southern transit at Bolshoy Gorky Lake resumed their voyages towards the end of the canal on Krasnoe sea.

M / V EVER GIVEN has been safely escorted to Great Bitter Lake by the #Suez Canal Authority.

The 43 vessels at GBL have already resumed transit and are expected to exit at 2030 (GMT + 2). 30 vessels will enter from Port Said Anch. for SB convoy. NB convoy to be confirmed later. pic.twitter.com/BVIB3zvwaQ

Even with the Ever Given being floated, meaning the Suez Canal may soon resume operations, ship analysts warned that it will take time, perhaps days, for the hundreds of ships awaiting passage to continue their voyage. Shipping analysts estimated that about $ 10 billion worth of trade was being sold daily due to traffic jams.

“All global retail trade is containerized, or 90% of its volume,” said Alan Murphy, founder of Sea-Intelligence, a marine data and analysis firm. “Name any brand and they show up on one of these ships.”

The Syrian government said over the weekend that it would begin rationing fuel use after the closure of the Suez Canal delayed the delivery of a critical shipment of oil to the war-torn country.

And in Lebanon, which has suffered from power outages due to the economic and political crisis in recent months, local news outlets have reported that erratic fuel supplies to the country could lead to further disruptions if the blockade continued.

Due to the fact that the number of ships stuck outside the channel rose to over 300 on sunday, the threat to oil supplies in Lebanon and Syria was the first sign of how quickly disruption to the normal functioning of world trade could be reflected on the outside.

Virtually every container ship that travels from factories in Asia to consumer markets in Europe passes through this canal. It’s the same with tankers loaded with oil and natural gas.

According to Moody’s Investor Service, the closure of the canal affects up to 15% of the world’s container traffic, resulting in delays in ports around the world. Tankers carrying 9.8 million barrels of crude oil, roughly a tenth of global consumption, are now waiting to enter the canal, according to estimates by Kpler, a company that tracks oil transportation.

The Syrian Ministry of Petroleum and Mineral Resources said the blockage of the canal “interfered with oil supplies to Syria and delayed the arrival of a tanker carrying oil and petroleum products to Syria.”

AT ministry statement saidthat rationing was necessary “to ensure the continued provision of essential services to the Syrians, such as bakeries, hospitals, water stations, communication centers and other vital institutions.”

From the start, when winds of over 70 miles per hour lifted the sands surrounding the Suez Canal into a blinding storm and Ever Given ran aground, the forces of nature played a huge role in the drama that disrupted the free flow of goods and oil across the planet.

As a 1,300-foot cargo ship, with nearly 20,000 containers, was trapped in a single lane of the canal, rescue teams had to tackle difficult issues not only in engineering and physics, but also in meteorology and earth sciences. And no natural phenomenon was as dangerous as tides.

The tides are constant, but they can rise higher and lower, depending on the location of the sun and moon. When the Sun and Moon are aligned, as they did for the full moon on Sunday, their combined gravitational pull results in exceptionally high tides known as spring tides. This is the case at the moment in the Suez, where the water level rises about 18 inches above normal.

According to NOAA, tides occur at intervals of 12 hours and 25 minutes. Water on the shore goes from high to low or low to high in six hours and 12.5 minutes.

This is the window for the rescue teams to free Ever Given. With each tide, the 220,000-ton ship had a better chance of becoming buoyant, and many tugboats used tidal forces to aid them in their fight to free the ship. But each time the tide came, the ship’s hull was subjected to new loads, and the danger increased.

The tidal currents in the Suez peaked on Sunday and Monday, which means it was a critical moment to finally free the ship. By 15:00 they succeeded, the ship was afloat again.