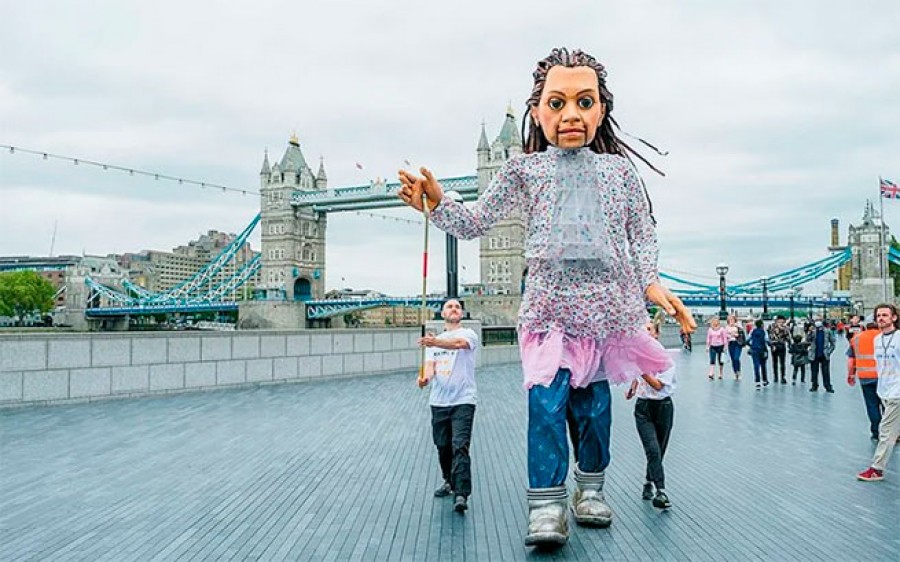 Amal, an unaccompanied refugee doll 3.5 meters high, is being moved by three people, one on stilts. On August 7, it will pass from Turkey to Chios, making a symbolic stop on the route, the first on the difficult transition to Europe.

“Nine-year-old girl” is now preparing for a long journey. In a few months, she will begin an independent journey, from the Syrian border to Britain. On the way, the doll will cross Turkey, Greece and continue on its way through Europe. There she wants to find her mother, return to school to start a new life. This is the story of little Amal, a 3.5-meter-high doll in the shape of an unaccompanied refugee girl who will walk 8,000 kilometers to shed light on the stories of millions of young refugees.

The idea was born in the Calais refugee camp. Six years ago, two Britons organized various training workshops for refugees there. Thanks to this experience, they staged the theatrical performance “Jungle”, which was a great success in England and America. In this performance, one of the characters was Amal, a little girl from Syria, unaccompanied by adults. The enthusiasts decided to develop and multiply this story.

They originally asked a famous group of puppet craftsmen in South Africa to create an Amal doll. As they explained, they deliberately wanted her to be so big to attract attention, to make her look at her. The doll will be controlled by three people – one on stilts, and two will walk behind and control her hands. Amal’s eyes are opened and closed using a computer. She has no voice, but she will be able to communicate through movement and sometimes whispering so that someone in the group can convey to the audience what she wants to say. While she was at the center of the action, a group of internationally renowned artists began to organize the trip. Yolanda Markopoulou was chosen as the leader of the action in Greece. The directors, who have extensive experience in the production, have been organizing events for the past year together with a number of Greek partners, which will take place in six cities in Greece.

On August 7, Amal will cross from Turkey to Chios. A symbolic stop on the route, the first difficult crossing to Europe. There she will be greeted with music and performances, and in two weeks she will be transported to Ioannina. From there to Trikala, Larissa to reach Elefsina and Athens. At each stop, the team negotiates cooperation with municipalities, various organizations and artists. The aim is to leverage the potential of each region to turn every stop into a celebration of the city itself. The Amal doll will arrive in Athens at the end of August. This will be the first major European city to be visited by the participants of the action.

Yolanda Markopoulou explains that every creative activity will be based on a welcome act: “If little Amal came to your city, how would you receive her? This can be a very simple gesture, such as giving her a glass of water, accepting her, giving her clothes, or playing with her. Hug or caress, because her mother is not next to her. ” In Piraeus, for example, the event will take place at the Municipal Theater, as was the case with the refugees after the Asia Minor disaster. The next day she will go by ship to Bari. The troupe will make a total of 65 stops until they reach Manchester. Numerous musical, dance and theatrical performances will take place during the journey.

The goal of the program is to engage the local community in the problem of refugee children, leaving behind a legacy of creative learning and awakening. A series of master classes for teachers have already been held in Greece as part of the training. For example, Camera for Amal, where teachers learned how students can express thoughts and feelings through photography. A puppetry and storytelling workshop to teach children how to create dolls that they can give Amal to accompany her on a long journey. And finally, a master class so that children inspired by this trip can create their own comics.

“Little Amal, of course, will not be alone on the entire route,” the organizers note. “She travels with a troupe of 25 people, opening up the borders for her. In every city she is greeted with joy. ” Amal can bring hope to many unaccompanied refugee children. But the point is to seriously discuss the problems these children face on their difficult and dangerous path – lack of access to education, difficulties and often reactions to their integration in the countries where they live. “Amal” represents millions of children and the main thing that they want to convey is the words “Do not forget us.”