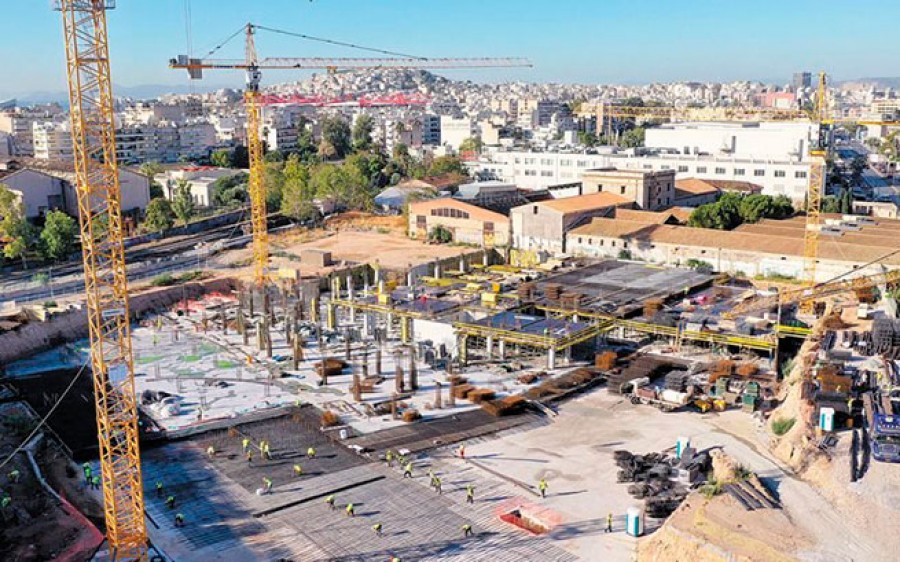 Investments in real estate development and renovation, totaling more than € 300 million, will be promoted in the near future on the axis of Piraeus Street, with an emphasis on the section from Hamosternas to Faliro, where the largest volume of abandoned properties is located.

As a rule, these are former industrial facilities (abandoned production facilities or warehouses), which are now considered usable by changing the purpose of use and adding new modern buildings. It is expected that in the coming years, from the chaos of abandoned industrial buildings that are located on the axis along Piraeus Street, new trade and cultural facilities, offices and even hotels will appear.

Commercial park with an area of ​​15,000 sq.m. Is a facility developed by the Dutch company Ten Brinke Hellas, which began to be built at the intersection of Piraeos and Kifissos streets. The BIS (Packaging Industry SA) manufacturing division was located in the area until the late 1990s, and then it was transferred, selling the property to the Plaza Centers group in Israel. The latter then ran an ambitious shopping center development program outside Israel. Over the years, due to difficulties in obtaining the required licenses, Plaza left the Greek market.

Thus, the property was sold a few years ago and construction of a commercial park has begun today, which is estimated to be completed for use in the first half of 2022. It should be noted that the property is located next to a large commercial agglomerate, which includes the stores of the Jumbo, Leroy Merlin and Kotsovolos chains. Thus, the commercial impact of the point will be maximum, which can act as an important pole of attraction for visitors not only from the surrounding area, but also from other parts of the city.

An investment of 113 million euros has been allocated for the construction of a functional, modern office center. But the Ministry of Infrastructure and Transport also decided to invest in the project and entered the share, including through PPP. The aim is to house all the services of the General Secretariat for Infrastructure, which are currently housed in 13 separate buildings, mainly in the center of Athens, and are currently being rented. The new building will be built at 166 Piraeus Street, at the Tavros level. This is an 8.7-acre private area, close to the Rouf commuter station. This site now houses the Central Public Works Laboratory, a service of the General Secretariat for Infrastructure. As part of this investment, a pedestrian bridge will be built over Piraeus Street, which will provide access to the new office building. The goal is to construct a modern building with bioclimatic characteristics, special architecture, reduced operating costs and a number of amenities such as premises for a kindergarten, warehouses, doctors’ offices, a library, meeting rooms, a conference center, a conference hall, a restaurant. and the museum. A related competition is expected to be announced in the coming weeks.

The application process for investor interest in the development of the State of Innovation project is scheduled for April 19, following a recent extension provided by the Ministry of Development, which “manages” the relevant public-private partnership. The project concerns the use of the listed property of the former CHROPEI on Piraeus street, on the Faliro level, close to the “Elais” plot. The contractor is likely to take over construction and project management under the State of Innovation program in early 2022. As Christos Dimas, Deputy Minister of Development and Investment, recently said, there is a need to find a contractor with experience in the construction sector, as well as in the management of innovative ecosystems, which can portend valuable partnerships between companies.

The State of Innovation envisions an investment of 60 million euros (at least for now), not excluding that the final cost will be much higher, possibly approaching 100 million euros. The CHROPEI site dates back to the late 19th century and has remained unused since the 1980s, when the paints and varnishes business ceased operations. The building area is about 18,000 sq. M. The aim of the renovation is to create a modern complex of office buildings that will house start-up technology companies, as well as research and development departments of large companies. The 17.9-acre site was owned by the National Medicines Agency, which donated it to the Ministry of Development.

It is assumed that buildings with an area of ​​45,000 sq.m. will be constructed, of which approximately 25,000 sq.m. intended for two hotels and the remaining 20,000 sq.m. for cultural and research needs. Hotels, Leisure, Restaurants and Technology Research Park

One of the most ambitious projects concerns the reconstruction of the Biochalco area, where the objects of the symbolic industry were located in the past. This is a 70-acre property at 252 Piraeus Avenue, which is adjacent to the Hellenic World Cultural Center of the Hellenic World Foundation (FHW), the School of Fine Arts (ASKT), and the Ministry of Culture building at 260 Piraeus. the area is considered ideal for the development of culture as well as tourism, as the hotel is close to popular tourist attractions.

In this context, based on a relevant study prepared on behalf of Βιοχάλκο ARIS Architects SA (A. Mitropoulos), the construction of two hotels, a technological research and development center, a 30-acre park, as well as a museum, playgrounds, sports facilities, restaurants and places of rest. The site will have fountains, artificial ponds, as well as five kilometers of sidewalks and bike paths and parking spaces.

This is an investment of 120 million euros, which has been approved by the competent inter-ministerial committee as strategic in nature. It is assumed that within its framework, buildings with an area of ​​45,000 square meters will be built, of which approximately 25,000 square meters. are intended for two hotels and the remaining 20,000 sq.m. for cultural and research facilities. It is worth noting that the design of all buildings will be bioclimatic, in accordance with the LEED certification standard.

At the same time, it is important to note that this investment utilizes the unused building stock and highlights the industrial heritage of Athens. In addition, these investments are intended to complement and support the existing use of cultural assets in the wider region, as well as the current urban and spatial planning structure as defined by the Athens-Attica master plan. This emphasizes the cultural and recreational use of the axis of Piraeus Street, while, especially for Eleonas, it is noted that it is an area of ​​strategic importance for enhancing the development dynamics and competitiveness of Attica and the area of ​​Athens-Piraeus connection.