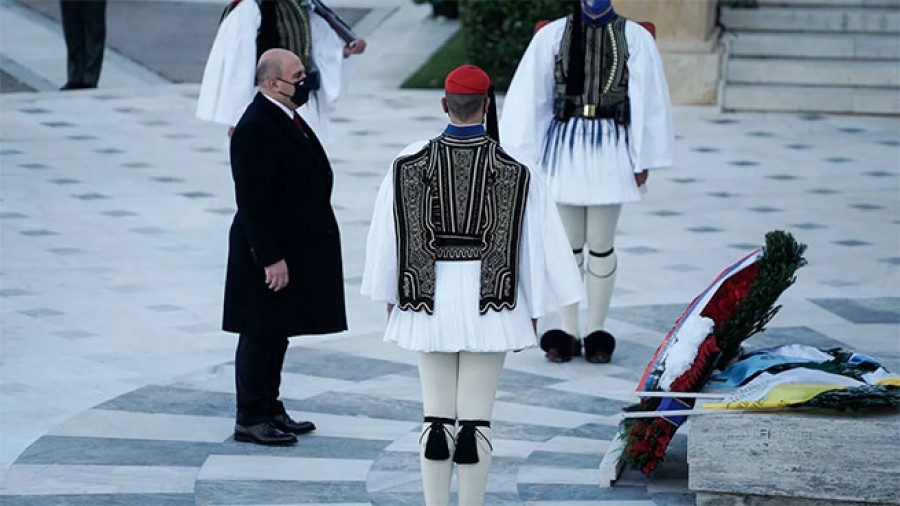 Immediately following the conclusion of the festive program in Athens on Thursday 25 March, the Russian Prime Minister traveled to Thessaloniki and then made a two-day private pilgrimage to Mount Athos.

Mishustin represented Russia at the two-day celebrations on March 24 and 25 in Athens on the occasion of the 200th anniversary of the beginning of the national liberation revolution of 1821-1829. The Greek Church News Agency Romfei also reported that the Russian prime minister had begun his visit to Mount Athos on a private visit.

RIA Novosti reports that Mr. Mishustin’s visit to Mount Athos testifies to the continued importance of spiritual and historical ties between Russia and Greece, with reference to the relevant statements by the Deputy Head of the Department for External Church Relations (DECR) of the Moscow Patriarchate, Archpriest Nikolai Balashov.

“It is very gratifying that the Russian state was represented at such a high level at the festive events held in Greece. After all, the liberation of Hellas cannot be imagined without a very significant Russian participation,” Balashov said.

He expressed satisfaction that the visit of the Russian Prime Minister “also has an additional, albeit private, spiritual dimension.” “As an Orthodox Christian, Mikhail Vladimirovich took this opportunity to visit Athos again, to pray at its shrines. This is another reminder of the enduring importance of spiritual ties between Russia and the Greek world, of the historical and current interdependence of our countries. the Greeks, the Slavs, and representatives of other nations ascend side by side, “the priest said. According to Balashov, the great sadness for the entire Orthodox world is that the anti-canonical actions of Patriarch Bartholomew of Constantinople in Ukraine led to the appearance of division on Athos: “Some monasteries and monks accept the acts of Patriarch Bartholomew, on whom they canonically depend, for obedience. recognize the schismatic “OCU” proclaimed by the Tomos of Constantinople and refuse to concelebrate with its “bishops”, as, by the way, did the abbot of the monastery Philotheus Archimandrite Nikodim. ” The interlocutor of the agency recalled that all these events led to the impossibility for the bishops and clergy of the Russian Orthodox Church to take part in divine services celebrated on Mount Athos, since the name of Patriarch Bartholomew ascends behind them. “However, it is impossible to ignore the significance of Mount Athos for our country. As well as the significance of Orthodox Russia for Athos and its monasteries: after all, the traditions of Russian aid to Athos go back many centuries,” the deputy head of the DECR stressed. According to him, the Russian Church considers the current celebration of the 200th anniversary of the beginning of the liberation uprising in Greece to be an important event. Thus, the message of the Patriarch of Moscow and All Russia Kirill to the President of Greece was dedicated to the significance of this jubilee.

The visit of the Russian Prime Minister to Mount Athos was also commented on by a lecturer at Moscow University, associate professor at Moscow State University, a specialist in the history of the Church and Greece and one of the founders of the Holy Mountain publishing house Athanasius Zoitakis. The historian drew attention to the fact that the monastery of Philotheus is the prime minister attended and during his last visit to Athos in September 2020. “According to the information that was published in the Greek media, and this is now actually the only source of information from Athos, this is due to the fact that the Russian Prime Minister has spiritual ties with the Philotheus Monastery. On his last trip to Athos, he immediately stopped, spent the night, according to one information, in the cell (a small monastic brotherhood – ed.) at the Philotheus monastery, according to the other – in the Philotheus monastery itself. But in any case, we can say that in the Philotheus monastery, because the cell belongs to this monastery, “Zoitakis said …

He noted that the Greek media noted this circumstance as “an unprecedented step for the politicians of foreign powers. Because earlier, if these are Russian politicians, they stayed in a Russian monastery, if Bulgarian – in Bulgarian, Serbian – in Serbian, and so on.” … Speaking about the reasons for this step, the interlocutor of the agency noted that “this is a rather delicate question.” “We do not know who Mishustin’s confessor or the elder, from whom he takes some advice, but his spiritual ties with the monastery of Philotheus, shall we say, are obvious,” Zoitakis said. He also drew attention to the fact that in September last year, Mishustin and his wife also visited the Philotheos compound, one of the convents in Greece, which is under the spiritual guidance of the elders Philotheus. Answering the question about the possible goals of the current visit to Athos, the expert suggested that it could be, among other things, some kind of real human help. “Last time in Greece, it was reported that the Prime Minister took with him various medicines, some medical equipment, in connection with the new coronavirus infection, brought with him the Athonite monks. I think that now some kind of such support is also will be provided, “Zoitakis said. Commenting on the information about Mishustin’s possible meeting with the protoepistat Pavlos Lavriotis, a representative of the Sacred Epistasia of Athos, the expert said that it was simply a matter of an already established tradition. Epistasia is a body that possesses the administrative power on Athos, elected by the Sacred Cathedral of the Holy Mountain – Kinot. According to Zoitakis, statesmen who come to Athos also visit the administrative center of the Holy Mountain in Kares. “This is such a visit of courtesy. They meet with a proto-epistat. This is the tradition: if you are a person of high rank, then it is simply not accepted to come and immediately go to some cell or to some monastery without visiting the administrative center of Athos. those procedures that are consecrated by a centuries-old tradition. And on Athos, in general, traditions are honored and welcomed when guests also do this, “the agency’s interlocutor explained. Holy Mount Athos, a peninsula in the northeastern part of the country, is a special self-governing administrative unit within Greece. This is one of the main places of pilgrimage in the Orthodox world, which has preserved the ancient monastic way of life unchanged. Jurisdictionally, the Athos monastic “republic” refers to the Patriarchate of Constantinople. Despite this, it has virtually complete administrative independence from Constantinople and internal independence. All decisions on Athos are made by 20 monasteries, representatives of which are included in the Sacred Kinot. After the creation in 2018, with the participation of Constantinople, of the schismatic “Orthodox Church of Ukraine” (OCU), the Russian Orthodox Church ceased eucharistic communion with the Patriarchate of Constantinople, including Athos subordinate to it. The faithful of the Russian Orthodox Church were urged to refrain from pilgrimage to the Holy Mountain. An exception was made only in relation to the Russian Panteleimon Monastery: Patriarch Kirill allowed the laity of the Russian Orthodox Church to receive communion there, given the especially close connection of this monastery with the Russian Church and its great popularity among Russian pilgrims. The Panteleimonov Monastery was founded by Russian monks and of all the Athonite monasteries gathered most of the inhabitants from Russia and other countries that are the canonical territory of the Russian Orthodox Church. At the same time, a number of other monasteries also have spiritual ties with the Russian Orthodox Church, in which Russian-speaking monks also live. In addition, a significant part of the monasteries of Athos have not recognized the OCU and did not concelebrate with the schismatics, including the Philotheus monastery. Mishustin’s visit to the Holy Mountain in September last year was the first visit of a high-ranking Russian official to Athos since the breakdown of relations between the Russian Orthodox Church and Constantinople in October 2018. …