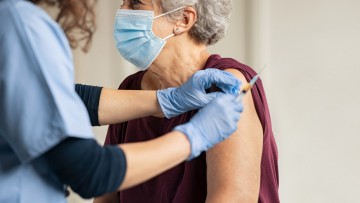 As officially reported, the vaccination registration is open for persons aged 70-74 years. Vaccinations for the first category of vulnerable groups began a week earlier.

Vaccinations for the 65-69 age group are expected to begin in early April as the application platform opens in the next few days.

As a reminder, on Friday, March 19, vaccination of citizens from the high-risk group with severe chronic diseases (group A) began. Thus, persons aged 60-64 years, citizens over 75 years old and medical workers belonging to group A were vaccinated.

From April 1, two new mega vaccination centers will start working – in Peristeri and Elliniko. According to the General Secretariat of Civil Protection, at the first stage, 48 vaccination rooms will operate in the two centers, and later their total capacity will reach 96 rooms (in each).

To date, 1,537,251 vaccinations of citizens have been carried out and 1,035,780 inoculations with the first dose have been made. And 501,471 citizens received the second dose of the vaccine.

As noted, in April Greece expects over 1,100,000 doses from Pfizer, 450,000 doses from AstraZeneca and 100,000 doses from Moderna. Johnson & Johnson has presented an indicative supply plan for the next quarter: the company will deliver 70,800 doses in April, 300,000 in May and 960,000 in June. The vaccination business plan in Greece includes the opening of 272 more vaccination centers from April 1, thus increasing their number to 1,073.