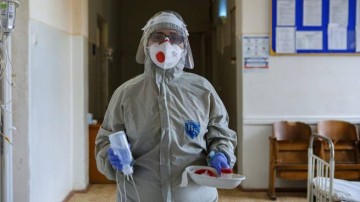 In Ukraine, the situation with the coronavirus is aggravating, the country continues to set anti-records. Over the past 24 hours, 326 patients have died, the number of new cases has reached more than 18 thousand, reports Euronews.

In the red zone is the capital of the country Kiev and 11 regions. Hospitals are overcrowded; since January, the number of patients requiring hospitalization has quadrupled. The last 2 weeks were marked by an especially sharp increase in the number of infected with a severe course of the disease. Irina Klokotskaya, head of the resuscitation and intensive care unit of the Zhmerinskaya hospital, says:

As a rule, severe patients have concomitant pathology – it can be diabetes mellitus, obesity, hypertension, coronary heart disease. They have more severe cases.

The deputy chief physician of one of the capital’s hospitals, Georgy Aksyutin, notes that the occupancy rate of Kiev hospitals is 99%.

More than 31,000 infected people have died in Ukraine during the pandemic. A month ago, vaccination began in the country, but to date, only 174 thousand people have been vaccinated, and almost all of them – only the first dose. Today, the Ukrainian Foreign Ministry announced the suspension of the export of Indian vaccines.

On Friday, the Ukrainian Foreign Ministry announced the suspension of the export of the AstraZeneca vaccine from India. This was announced by the head of the department Dmitry Kuleba. Referring to the secrecy of some of the reasons, he said that he would not voice them.

Recently it became known that a few days after the vaccination against the AstraZeneca coronavirus in Ukraine, a pharmacist of a military hospital’s pharmacy died. Another victim is a Ukrainian soldier, whose death occurred 2 days after vaccination.