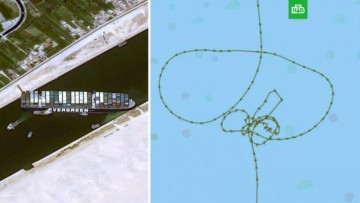 A Chinese container ship, 440 m long and 59 m wide, blocked traffic in the Suez Canal. Unable to sail along the logistic artery, the ships formed perhaps the largest traffic jam in history, which, according to analysts, costs $ 400 million an hour.

March 25, a huge container ship blocked traffic in the Suez Canal and provoked a traffic jam of hundreds of ships. They tried to drag the vessel away in tugs and dig it out with a small excavator – it did not help. The exchange reacted sharply to the incident.

According to the Kpler company, about 1.74 million barrels of oil a day went through the Suez Canal last year. About a third of this volume (550 thousand barrels per day) went to consumers in Europe, the rest to Southeast Asia. Of course, last year was not entirely indicative.

In connection with the accident of a container ship in a narrow part of the Suez Canal, the delivery of goods, including oil products, in the amount of about $ 10 billion is delayed, reports Bloomberg agency…

The grounded ship has led to an increase in the cost of shipping one dry cargo container, for example from China to Europe, up to $ 8 thousand, which is four times higher than a year ago. Transportation by tankers of the Suezmax category costs about $ 17 thousand per day, which is the highest figure since June 2020.

Blocking the channel already costs about $ 400 million an hour.

If merchant ships go along an alternative route – around the Cape of Good Hope, which will lengthen the route by 9.65 thousand km – then the cost of cargo transportation may increase by at least $ 300 thousand. This is how much the ship owners will have to pay for fuel.

The increase in prices for sea freight also affected routes that do not pass through the canal. At the same time, Lloyd’s List estimates the cost of moving goods along the canal in the western direction at about $ 5.1 billion per day. Eastbound traffic along this transport artery is approximately $ 4.5 billion.

The convoy of ships, due to the blockage in the channel, stretched almost to India.

Judging by the information from the tracking trackers, which the BBC leads, about 150 ships were blocked at both ends of the channel yesterday, today there are more than 160 ships (about 180, at the time of publication).

Notable is one fact that was noticed using the vessel tracking service VesselFinder, which showed that before entering the channel, the vessel drew a figure in the Red Sea that resembled a man’s sexual organ. The sailors explained that they say the ship was moving like this in anticipation of a call. compensating for drift from currents and wind. But it happened in a very symbolic way. I just want to add a little conspiracy and say that China showed the whole world its …