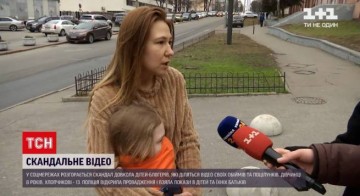 As you might expect, the parent of the young model and blogger Milana Makhanets does not see anything shameful or criminal in her daughter’s candid pictures posted publicly on the social network, says Strana.ua.

The mother of 8-year-old Milana Daria, whom the real can very well expect punishment for inappropriate upbringing, gave the first comments about the scandalous publications on Instagram, frankly telling about her daughter’s personal life with 13-year-old Pasha Pai. She claims that the content was intended for children (!), And that adult users simply misinterpret the visual revelations of a young couple.

Talking with the journalists of the TSN program, Daria Makhanets claims that the photos in bed that shocked users are just a joke. And in general, children only repeat popular trends, and there can be no talk of relationships:

They have no relationship, relationship. They are … partners. This is such a hype theme for the development of a children’s page. It was designed for children, not going out somewhere. That is, there was no meaning there, which now rises in some perverse character.

She also declares that she has no mercenary motives. The maximum benefit is getting any goods for mentioning brands in stories:

I never planned to make money from a child. I do not plan to earn money myself. I plan that when she grows up to be a popular blogger, when she is able to run the page herself – so that she will be popular.

In the meantime, it is being investigated scandalous case, Ukrainian President’s Commissioner for Children’s Rights Mykola Kuleba said that the accounts of young bloggers were blocked by the social network Likee. As a reminder, Likee is a social network identical to TikTok. It allows you to create and edit videos using a variety of effects. The main audience is children and adolescents 5-12 years old.