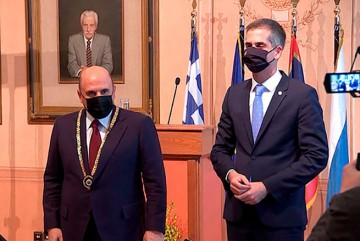 Relations between Russia and Greece will develop on a modern innovative basis, taking into account the historical experience and sincere sympathy of the peoples of the two countries for each other.

This was announced on Wednesday in Athens by the Prime Minister of the Russian Federation. Mikhail Mishustin, following negotiations with his Greek counterpart Kyriakos Mitsotakis, informs Parliamentary newspaper.

“The historical and cultural ties between our states create a solid foundation for joint work in various spheres, primarily in the humanitarian one,” the Prime Minister stressed.

He recalled that 2021 has been declared the Year of Russia-Greece History. In this regard, national programs of events have already been prepared, and in the near future this project will be officially launched, which, according to Mishustin, will help the citizens of our countries get to know each other’s culture and traditions better.

The head of the Russian government drew attention to the fact that Moscow and Athens are interested in promoting joint projects in various fields. The coronavirus pandemic has negatively impacted bilateral economic cooperation. “Last year, mutual trade fell by more than a third. There are untapped investment opportunities, ”the Prime Minister stated.

The agenda of the talks in Athens also included issues of protecting the health of tourists. “The Greek authorities are gradually opening the borders for travelers, but the main thing is that it is safe for people’s health, and we also talked about how to find such ways,” Mishustin said.

The parties agreed to continue work to improve the bilateral legal framework. Agreements in key areas such as healthcare, communications, communications, information technology are on the agenda, the head of the Russian government said.

“Our talks have demonstrated a common disposition for the comprehensive development of relations between Russia and Greece. We will do this on a modern innovative basis, taking into account the historical experience and sincere sympathy of our peoples for each other, “Mishustin summed up.

The head of the Russian Cabinet of Ministers is on a visit to Athens to participate in the anniversary events on March 24-25, on the occasion of the 200th anniversary of the beginning of the Greek national liberation struggle, which ultimately ended the centuries-old Ottoman rule.

Russia played a significant role in gaining independence by the Greeks. Russian squadron, together with British and French naval formations, sank the combined Turkish-Egyptian fleet in the Navarino battle October 20, 1827, which opened the way for the creation of the Greek state. In turn, the victory of our troops in the Russian-Turkish war of 1828-1829. forced the Ottoman Turks to officially recognize Greece. In 1829, Hellas received autonomy, and in 1830 – full independence.