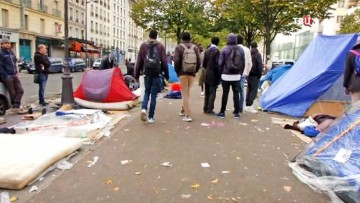 French police have evacuated the tent city of migrants, which was destroyed in the Parisian square of the Republic. Hundreds of protesters united in a rally called “Night of Solidarity”, setting up 300 tents in the center of the capital, reports The Associated Press.

The protesters are supported by several associations, which are demanding that the government provide migrants with decent housing. Ivory Coast asylum seeker Mamutu Ouattara says:

I used to sleep in a squat, but now I am here with my wife and daughter. There were many of us in the squat. My daughter couldn’t go to school. I need permanent housing so she can go to school.

Nikolai Pozner from the non-governmental organization Utopia 56 calls on the authorities:

Once again, we ask that people be placed in a safe place. All of these people are entitled to housing under the law, so we ask that the law be respected and that these people have a place to live.

In November last year, a similar rally was brutally dispersed by police squads, causing condemnation throughout the country. With this in mind, this time the police were as correct as possible – they did not use force, and the homeless migrants were transported from the square to the place of accommodation by emergency buses.