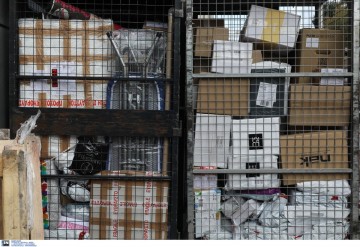 The real disaster with the delayed delivery of parcels during the pandemic by courier companies led to a flurry of complaints from customers.

The supervisor Εθνική Επιτροπή Τηλεπικοινωνιών και Ταχυδρομείων (ΕΕΤΤ) has already received thousands of complaints from consumers, and courier companies have been requested to report on their actions. The sanctions are reportedly due in the coming weeks.

Experts note that courier companies are indeed faced with an unprecedented situation, judging by the volume of citizens’ requests. According to the information, the number of complaints in the period from March to June 2020, during the first quarantine, increased sevenfold compared to the corresponding period in 2019.

Many complaints are about long delays in delivery. EETT aims to investigate the responsibilities of couriers and the reasons behind the collapse of the courier delivery system.

If EETT can possibly justify the postage delays, especially with regard to the first wave of the pandemic, which found companies completely unprepared, then things will be very different with regard to the problems that arose during the second quarantine.

A key issue is the tactics used by many courier companies, especially around Christmas. That is, the couriers referred to the fact that, having left the address, they could not find the recipient and returned with the parcel back (although, it seems, they completed their task to some extent).

There are thousands of complaints from consumers who they claim were at home waiting for a courier and he didn’t arrive. And then they found a receipt on their door that the courier had arrived after all. Consumers insist that “they heard no doorbell rings.” Others received SMS stating that the courier did not find them, probably, he arrived at a time when customers literally rushed out to the store for a minute and missed the delivery.

EETT will have to study all this confusion and punish those responsible.