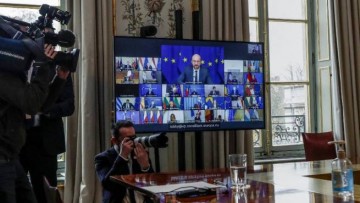 Violent discussions of the heads of European governments and states take place in the video link and concern the fight against the pandemic, the pace of vaccination and the supply of vaccines, reports The Associated Press.

Brussels proposes to deprive the country of supplies, where vaccines are produced, but from where supplies to the European Union are not coming. The low incidence rate is also taken into account. But not all EU leaders agree with this proposal.

“The pressure on them is enormous. This is now the number one political problem. It is very difficult to explain to its citizens why the European Union delivered 70 million doses to its countries and 40 million doses abroad. ”

Most of the restrictions are directed against the United Kingdom, which practically does not supply vaccines to the European Union. Ahead of the summit, the UK and the EU agreed to cooperate for the greater good, which helped ease some of the existing tensions between them.

The United States also by all means prevents the export of scarce vaccines outside its borders, and those present at the summit have many questions for the American president. At the same time, Charles Michel, President of the European Council, announced that it is necessary to preserve the long-term alliance between the European Union and the United States, TASS reports. He says:

“Our values ​​- democracy and the rule of law – are again under threat: internal and external. Both the EU and the US are more responsible than ever for future generations. We want prosperity around the world, we want to help raise people’s living standards. “

Michel added that the heads of state of the European Union declared to Joe Biden their readiness to work with Washington in the supply of vaccines, economic recovery, and the spread of democracy. The President of the European Council invited the American President to an online summit to discuss “strengthening transatlantic unity.”

Serious passions are boiling inside the European Union. Austria complains about the shortage of the country’s required amount of vaccines, and Poland insists on weakening patent restrictions, which will expand the production of drugs in the Union. Its claims are opposed by the producing countries. Other important issues are considered at the summit, such as confrontation with Turkey over geological exploration in the Eastern Mediterranean. A presentation on this topic is presented by Josep Borrell:

“For the future, I have identified a couple of measures in a dual approach. On the one hand, there are positive measures, and on the other hand, measures that can be taken if the situation worsens. “

Yet the priority for discussion by the presidents and prime ministers of the countries is to overcome the increasingly acute shortage of vaccines in the European Union.