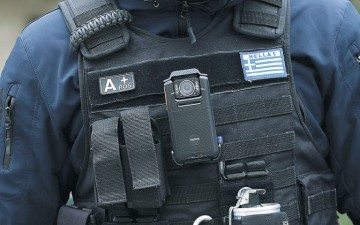 Pilot use of body cameras by employees of the ΔΡΑΣΗ and OPKE groups has begun. These are handheld cameras from Hytera that will record police movements while on duty.

At the first stage, the camera will be placed on the back of a police officer from the emergency response squad, as a special. uniforms. The cameras will submit the image to the Greek police headquarters (in Attica), located on Katehaki Avenue, and the resulting video materials will be archived, stored and subsequently made available to the prosecutor’s office.

The device can work, according to the manufacturer, and in poor lighting conditions. At the first stage, 20 cameras will be used. The Joint Crisis Management Coordination Center, following an order from the Ministry of Civil Protection, conducted a study of technical details and legal issues regarding the protection of personal data in the use of cameras. The police officers who use them on the streets of Athens have received training.

Another 20 cameras of different types were also available by MAT and were used as trial ones during the 6/12/2020 demos, but their expanded use is still being explored.

These cameras are mounted on a special pole (shaft) carried by an authorized police officer. In a Twitter post, Civil Protection Minister Michalis Chrysochoidis said: “The cameras are being used by ACTION and OPKE as a pilot project. After a while, they will be used everywhere. Everything is captured on the camera: images, sounds, movements, in general, the whole truth. “