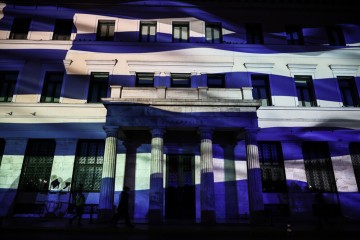 The celebration of 25 March, the 200th anniversary of the grandiose Greek revolution, has reached its climax.

To commemorate the anniversary, the country’s buildings were dressed up in the appropriate style: their facades are highlighted in the blue and white colors of the Greek flag. The city halls of Athens and Piraeus prepared in advance the lighting in a similar style to the ΣΕΦ stadium.

They were joined by: the building of the Ministry of National Defense, the fountain in Syntagma Square and the stadium “Theodoros Kolokotronis” in Tripoli.

Similar steps are expected in other cities around the world. More than 50 cities have joined in the celebrations, according to diplomatic sources.

These are places associated with the Greek revolution, for example, Odessa, where Φιλική Εταιρία was founded, and others. The choice of buildings that were lit in the colors of the Greek flag was chosen at random.

Recall that on the day of the celebration of the 200th anniversary of the revolution in Greece, high-ranking foreign guests arrived in the country: Prince of Wales Charles and his wife Camilla, President of the Republic of Cyprus Nikos Anastasiadis, Russian Prime Minister Mikhail Mishustin, French Minister of National Defense Florence Parley and others.