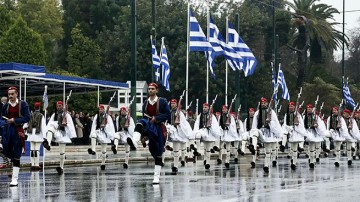 The military parade dedicated to the 200th anniversary of the Greek revolution lasted about an hour. It was held under the close scrutiny of the country’s political leadership, as well as distinguished foreign guests, who marked the anniversary of our country with their presence.

The servicemen of the Armed Forces of Greece passed in front of a platform installed on the central square of Athens – Syntagma.

For the first time, riders in traditional costumes from different parts of Greece took part in the parade. Another highlight is that for the first time the image was captured through an airplane flying over the Parade.

Of particular note was the message from the Zeus pilot, who sent a message of “pride and confidence.” “Above the clouds and over the blue sea, we create a blue and white shield for every corner of our country. We honor the 200th anniversary of 1821, those who liberated the Motherland, and those who subsequently raised it in everything, on our land, in democracy and prosperity, we are firmly holding the baton of the national debt. We are the guardians of independence and peace. ” “We look up, and our hearts are on top.” “Happy birthday, Motherland, happy birthday, Greeks, everywhere in the world,” the pilot concluded. Another memorable moment was the emotion of Prince Charles, who was “caught” crying on camera.

Today’s celebration began with the raising of the Greek flag on the Sacred Rock of the Acropolis in the presence of the President of the Republic Katerina Sakellaropoulou and Prime Minister Kyriakos Mitsotakis.

This was followed by a panegyric in the Holy Diocese of Athens under the leadership of Archbishop Jerome, as well as the laying of wreaths at the Democratic Party and high-ranking foreign leaders. The ceremony was attended by Prime Minister Kyriakos Mitsotakis, opposition leader Alexis Tsipras, Foreign Minister Nikos Dendias and Minister of National Defense Nikos Panagiotopoulos. The President of the Republic, Katerina Sakellaropoulou, was the first to lay the wreath, followed by the National Anthem of Greece. Laying wreaths at the tomb of the unknown soldier

Posted by Sputnik Ελλάδα on Thursday, March 25, 2021 Full video of the parade.