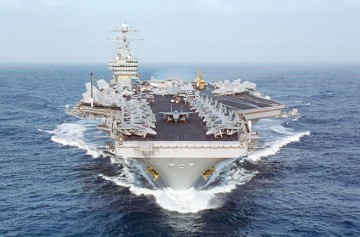 Around a quarter of a century before the Greek Prime Minister stepped on the USS Eisenhower, a much more surreal “ceremony” took place on the deck of the ship. The producers of the American video game “Wheel of Fortune” filmed the episode on the runway and inside the aircraft carrier. Slender young women in fashionable tight dresses marched in high heels among the crew of the ship, and a luxury car was parked next to the fighters – a prize for the winners of the game. The sexist and kitschy American Dream has been one of the most important symbols of superpower power. In fact, this aircraft carrier symbolizes much more than it might seem at first glance. Its history is intertwined with some of Washington’s greatest crimes, as well as America’s biggest political and economic setbacks. Plans to build the aircraft carrier Eisenhower (now known as Mighty Ike) were presented in 1970 and launched in 1977. However, these five years have witnessed the greatest economic crisis the United States has experienced since the Great Depression of the 1930s. The dollar’s dominion was shaken as it could not keep up with the rapid pace of global development, and the entire economic architecture that was created after World War II collapsed. Thus, the aircraft carrier Eisenhower became part of the US Navy at the beginning of a new era in which the projection of military power was to replace the lost economic momentum of the United States. Half a century of failure and crime Ike’s first mission took place in the Mediterranean in the late 1970s. But for the first time, an aircraft carrier will be involved in real combat operations when President Carter ordered it to go to the Indian Ocean in 1980. It was the time immediately after the Iranian revolution, when 52 American diplomats and citizens were held hostage at the US embassy in Tehran for 444 days. President Carter’s attempt to free them with the help of the military operation “Eagle’s Claw” led to a disgraceful failure, as US Special Forces helicopters were mechanically damaged, two of them collided, resulting in the death of eight American soldiers. Although the aircraft carrier Eisenhower was not directly involved in the operations, she was sent to the area to patrol the day after the accident. The morale of its staff was said to have been so low that Commander James Moldin ordered more beer to be distributed to the sailors and sports events organized on deck. Equally heartbreaking was the aircraft carrier’s next raid in the Mediterranean in 1982. One of his planes crashed on its own near the Souda base, killing 11 people on board. The same aircraft carrier was used to evacuate the US Embassy in Beirut after the outbreak of the civil war. Perhaps the first serious airstrikes by Hayk’s planes were on the obsolete MiG-23 of the Libyan Air Force, when the Pentagon bombed the country of Muammar Gaddafi. An unequal and cowardly fight that may have inspired the filmmakers of Top Gun. However, until the 90s, the most “impressive” presence of the aircraft carrier was the events dedicated to the 40th anniversary of the Normandy landings. Unfortunately, even this image was literally destroyed in 1988 when the aircraft carrier collided with a Spanish tanker en route to the port of Norfolk in Virginia. Fortunately for the Pentagon and unfortunately for humanity, the aircraft carrier has successfully completed its missions since the 1990s, participating in operations against Iraq in the first Gulf War. In fact, of course, his role was to protect Washington’s “wallet”, that is, the oil facilities of Saudi Arabia. Years later, we find him patrolling the coast of Haiti to defend America’s interests in the long-suffering Caribbean island nation. But he will spend most of his time near the Arabian Peninsula watching the blockade of Iraq and then sending bombers against targets in Syria. Thus, the old lady of the American Navy connected her life with the modern history of the United States. He was born at a time when the dollar was losing its natural hegemonic position and was helping the US economy survive by controlling foreign wealth and especially the oil of the Arab world. The history of the ship, which is expected to be decommissioned in a few years, is as tragic and in some cases comical as the history of America. Published by Satellite Greece
Translated by Russian Athens.