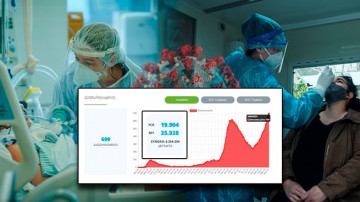 Today, the National Health Organization announced a large number of cases, and this is perhaps the most critical two weeks since the start of the pandemic.

In the past 24 hours, EODY has detected 3,062 new cases of Covid-19 infection. Also, according to official information, 699 patients were intubated in the intensive care unit, 67 new deaths were registered.

The national health care system continues to be in a critical situation. The issue is particularly acute in hospitals and intensive care units. Experts are now sounding the alarm, arguing that the coming days are critical for the health system.

The epidemiological situation in the country, with a particularly high percentage of positive results, worries the expert committee as well as the health authorities.

According to the Ministry of Health’s emergency plan, 251 places in private clinics and in Red Cross hospitals not previously associated with Covid have been moved to the category exclusively for the treatment of Covid.

There are 206 private doctors taking part in the battle against the coronavirus, now helping their colleagues in public hospitals, mainly in Sismanogleio, Red Cross, Attico and Triasio. Nevertheless, the forecasts of experts are not very good so far, and many of them publicly state that an increase in the number of intubated and deaths is expected.

Athanasios Exadaktylos, President of the Panhellenic Medical Association, asked to prepare the health care system for the long-term fight against coronavirus. The peak incidence in the country is expected on March 26 and 27. He also did not rule out that next week we will again see a large number of new intubated – 3000 cases and more.

However, there are problems with hospitalization not only in Attica, but also in other parts of the country. Achaia’s two large hospitals are also in critical condition, with very high hospitalizations for coronavirus patients in intensive care units. As it became known, the reserves of hospitals are completely exhausted, and the Ministry of Health is considering the possibility of additional recruitment of doctors.

The competent health authorities are watching with concern the increase in viral load in the regional office of Achaia. At the same time, the Patras Medical Association calls on private doctors to help in this situation.

“Avral” in the hospitals of Thessaloniki

The situation in intensive care units and hospitals in Thessaloniki remains tense, with great problems due to mutations. The admission of patients with coronavirus continues to show a growing trend, forcing the city’s health authorities to change the status of clinical and regional hospitals. At Papageorgiou Hospital, there was only one free bed left in the intensive care unit yesterday, according to employee president Panagiotis Tachtidis.

Any relaxation of measures is temporarily frozen.

With these data, any relaxation of measures is temporarily “frozen” and, of course, the opening of retail trade on March 29 should be forgotten.

As we predicted earlier, the opening of retail trade in non-food products is expected no earlier than mid-April (and possibly early May), and it is too early to talk about the opening of the catering sector. Apparently, as “evil tongues” spoke a month ago, everything will be closed until Easter. The situation is the same with schools, and the previous announcements about their partial reopening in April are still premature.

There are 67 new deaths among patients with COVID-19, with a total of 7,649 deaths since the beginning of the epidemic. 95.7% had an underlying disease and / or were 70 years of age or older.

The number of patients who underwent intubation was 699 (65.5% of men). Their average age is 68. 81.5% have an underlying medical condition and / or are 70 years of age or older. Since the start of the pandemic, 1,632 patients have been discharged from intensive care units.

The distribution of cases in Attica today is as follows:

Situation in the world