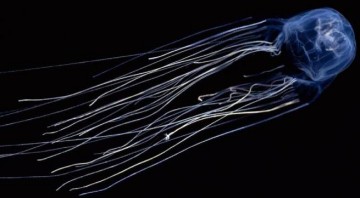 Even 2 centuries ago, in the north of Australia, people suffered and even died after being immersed in sea waters, but the reason for this could not be determined. Locals even believed in the existence of the sea devil, taking the lives of bathers.

For many years, scientists have been struggling to solve the mystical riddle. The victims complained of severe pain, difficulty breathing, palpitations. However, doctors could not find the source of this condition, research by biologists helped.

The discoverer’s laurels rightfully belong to the scientist Hugo Flecker. After another tragedy, he attracted rescuers to work and asked them to catch all the marine life that was at that time in the water on the Cleveland coast (Queensland). Carefully studying their “prey”, the researcher discovered a hitherto unknown species of jellyfish.
Its peculiarity was its absolute transparency, thanks to which it was impossible to see it in the water. But the jellyfish took shape under the influence of an ultraviolet lamp. It was named Chironex fleckeri, and the locals dubbed it “Sea Wasp”.

Currently, this jellyfish is considered the most poisonous creature in the world. Even a light touch causes severe pain and other symptoms described above. And if the sea wasp purposefully swims up to the bather, he is, in fact, doomed.

The Australians took note of the discovery of scientists, but it did not frighten them too much. Local residents have found an effective solution – to swim in tights. They argue that when in contact with nylon material, the jellyfish does not feel a living body and does not release its deadly poison. On the northern coast of Australia, where a meeting with a poisonous jellyfish is especially likely, both men and women put one pair of tights on their legs, and the second over their heads, having previously made a hole in them.