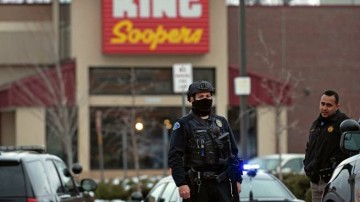 In the US state of Colorado, 10 people, including a police officer, were killed on Monday at the hands of an unknown shooter, reports The Associated Press.

The bloody incident took place in Boulder, at the King Soopers supermarket. First, an unknown man opened fire near a trading establishment, then moved inside. The police who arrived at the scene detained the criminal, but one of them, Eric Talley, became the victim of an inadequate shooter. The identity of the detainee is not disclosed, while the motives for the murder of ten people are unknown. An investigation is underway. Maris Gerold, head of the city police says:

We will work day and night, the suspect has been detained. I want to reassure all residents, they are completely safe, and we will try to establish the identity of the victims as soon as possible. We will work in constant contact with the coroner’s office to get this done as quickly as possible.

US President Joe Biden is informed of the tragedy. This is the seventh mass murder in the country since January 2021. Just a week ago, on March 16, 8 people were killed in an attack on three massage parlors in Georgia.