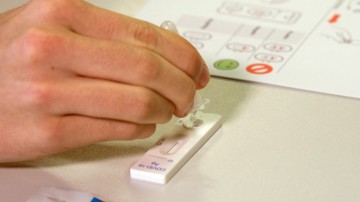 Manolis Dermitzakis, a professor of genetics based in Geneva, expresses concern over whether Greece will be able to keep the number of coronavirus cases low until May, when tourism is expected to open.

Speaking about the innovation, the practice of self-testing, the expert notes that this is another important measure to reduce cases of the disease. “I expect that a very large percentage of citizens will conduct a self-test. It is important for a person to know in what state his health is. Thus, if someone finds out that he is a carrier of the virus, he will be able to protect himself and those around him, ”the professor notes.

At the same time, Mr. Dermitzakis believes that the reason the number of cases remains high (despite the quarantine measures) is that there are too many transmissions of the virus in the room.

“People need to communicate, regardless of measures. Logic dictates that since we cannot avoid contacts that occur in one way or another, let’s move communication in a coordinated and careful manner to open and well-ventilated places where transmission of the virus is much less, ”the expert says.

Among other things, Mr. Dermitzakis explains that it would be good to open up traffic between municipalities so that people can go beyond a certain small space, especially in densely populated areas with little green space.

In the first phase of self-isolation, the method of strictly limiting contacts worked. But now it does not work, because people physically and psychologically can no longer be in a similar position, which has been too long.