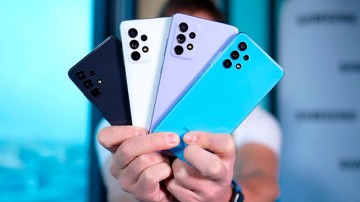 March has become very productive for the Korean brand Samsung. The company introduced three new smartphones from the series of state employees at once – Galaxy A32, A52 and A72.

The manufacturer relied on classic design, objective functionality and, of course, a reasonable price tag. The models are similar to each other (especially A52 and A72), but there are a number of differences. All the details, nuances, pros and cons are in this article.

New items are equipped with a proprietary Super AMOLED display – the hallmark of Samsung. The 2400 × 1080 Infinity-O display delivers bright, vibrant images. All versions (even the inexpensive A32) received a high refresh rate – 90 Hz, which even many iconic flagships cannot boast of. Thanks to this, the pictures are scrolled smoothly and without delays. The display size varies: 6.4 “in the A32, 6.5” in the A52 and 6.7 “in the A72. The difference is not critical, but still tangible. The front panel of the devices is covered with a protective glass Corning Gorilla Glass 5.

The filling in the models is different. A52 and A72 are powered by an eight-core Snapdragon 720G processor with 8 Kryo cores, proprietary Adreno 618 graphics and a frequency of up to 2.3 GHz. The already familiar chipset has repeatedly demonstrated good performance results, so this is a very good choice for mid-budget smartphones. The younger brother from the series received the Mediatek platform using a 12-nanometer Helio G80 processor with 2 Cortex-A75 cores, 6 Cortex-A55 cores, and a Mali-G52 MC2 graphics accelerator. It is weaker than the Snapdragon 720G, but stronger than the competition in its price segment.

Camera blocks, again, are similar to each other, but there are a number of differences. The three modules are the same in all models:

Even the youngest smartphone has optical stabilization, which is very, very cool. The combination of several modules, coupled with a good technological side, allows you to achieve ideal results of photo and video shooting in any conditions, whether it be evening twilight or a photo in motion. Original Samsung A72 additionally received a telephoto lens with 3x optical and 30x digital zoom.

The new Samsung Galaxy A-series boasts energy efficiency. The batteries installed in them (for 5000 mAh in the A32 and A72, and for 4500 mAh in the A52) can withstand up to two days of operation on one supply of energy. Smartphones support fast charging technology (15W in the A32 and 25W in the A52 and A72), so it’s easy to stay connected. I would also like to note that for the first time in the budget line, Samsung has implemented protection against water and dust according to the IP67 standard. True, only two older models received it, but it’s still pretty good.

In general, the new smartphones Galaxy A32, A52 and A72 will definitely find their consumer thanks to the combination of bright screens, productive cameras, good filling and an objective, mid-market price tag.