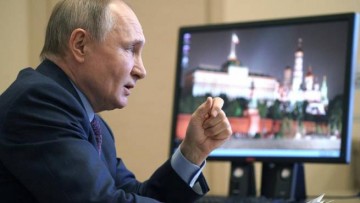 The response of the Russian president to the statement by European Commissioner Thierry Breton on the refusal of the Sputnik V vaccine was laconic: “We are not imposing anything on anyone.”

Vladimir Putin’s statement was made at an online meeting on vaccination, Evropeyskaya Pravda informs:

“We do not impose anything on anyone. But when we hear such statements from officials, the question arises, whose interests are protected and represented by such people: the interests of some pharmaceutical companies or the interests of citizens of European countries. Please, let them do what they think is necessary and expedient in order to fulfill the tasks they face ”.

Vladimir Putin also noted that more and more states are showing interest in the Sputnik V vaccine. At the end of January, Russia submitted an official application for the approval of the drug to the European Medicines Agency, but only on March 4, the EMA received a decision to start considering it.

Earlier, Thierry Breton in an interview with French media stated on the uselessness of the Russian vaccine in the EU countries and focused on the difficulties Russia is experiencing with its production. However, the Kremlin notes that the task of deploying capacities for the production of drugs was solved in the shortest possible time. To date, Sputnik V has been approved for use in 55 countries around the world, and on Tuesday, March 23rd, the Russian president plans to vaccinate.