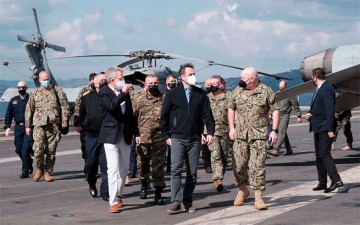 The Prime Minister was greeted by the Commander of the United States Navy in Europe and Africa, Admiral Robert Burke and the commander of the strike group under the command of USS Dwight D. Eisenhower, Lt. Col. Scott Robertson, and Captain Paul Campagna accompanied him on the aircraft carrier.

“This week, as we celebrate the 200th anniversary of the start of the Greek Revolution, we are thinking about the bonds that unite us with the United States. Especially valuable are not only social, political, economic ties, but also historical ones. Recall that Adamantios Korais often corresponded with Thomas Jefferson, “the Prime Minister noted and added that” military cooperation between the United States and Greece is at an extremely high level. ”

Initially, Mr. Mitsotakis visited the hangar that houses the MH-60R “Romeo” helicopter, one of the most advanced helicopters in the US Navy. It is noted that Greece has signed a contract for the purchase of four such helicopters at the first stage and three more in the future. The first will be received in mid-2022. The Prime Minister was informed by the crew about the various operational capabilities of the helicopter and its controllability. “I would like to emphasize how honored it is for me personally and for our national mission to have Prime Minister Kyriakos Mitsotakis and his National Security Team members with us on the aircraft carrier USS Dwight D. Eisenhower, in Souda Bay. The base is the starting point for our defense cooperation, ”said US Ambassador to Greece Geoffrey Pyatt. After that, Mr. Mitsotakis walked to the deck and onto the runway, where the F / A-18 fighters “lined up”. He was informed about the operational capabilities of the aircraft carrier, its armament and the mechanisms at its disposal for the safe takeoff and landing of aircraft moving at extremely high speed.

The prime minister said the Court’s base improves cooperation between the Greek and US armed forces, as well as the protection of common values ​​and interests in the wider region.

On board the aircraft carrier, Prime Minister Kiryakos Mitsotakis met with the US Ambassador to Greece Geoffrey Payette, Rear Admiral Burke, Rear Admiral Robertson and Captain Campania. From the Greek side, the meeting was also attended by Defense Minister Nikos Panagiotopoulos, Chief of the General Staff General Konstantinos Floros, Chief of the General Staff Vice Admiral Stylianos Petrakis and Director of the diplomatic office of the Prime Minister Eleni Surani.

Upon departure from the aircraft carrier, the Prime Minister took a group photo, and also received symbolic gifts from the crew: a coin and a cap.

The US aircraft carrier USS Dwight D. Eisenhower leads the naval strike group, which includes, among other things, the Ticonderoga-class cruisers and the Arleigh Burke-class destroyers. During the voyage to Crete, the naval frigate Ψαρά (Fisherman) was integrated into his command, and a joint exercise was conducted with the participation of two Greek submarines and air force fighters.

Prior to this, this strike team conducted successful exercises with the Turkish Navy, who were also assured of peace, friendship and an important role in joint “defense” activities against Russia in the Black and Mediterranean Seas.

During the exercise, the ships of the strike group, whose flagship is the aircraft carrier USS Dwight D. Eisenhower, in particular USS Thomas Hudner, the missile cruiser USS Monterey and two frigates entered the Black Sea. They have arrived to participate in the Sea Shield exercise conducted by Romania. USS Monterey Commander Joseph Baggett said that the ships are in the Black Sea – to “strengthen security and stability in the region.”