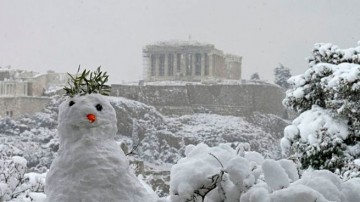 Spring weather is unstable and, after the recent warming, a sharp cold snap is expected in Greece over the next two days. According to meteorologists, these days will be the coldest in the past 18 years.

According to meteorologist Clearhos Marousakis, snow will fall in the northern suburbs of Athens, while rainfall in the form of wet snow may fall in the central regions.

Snow on Parnif on Tuesday afternoon

According to meteorologists, in the central part of the country, as well as in the northeast – Macedonia and Thrace, Thessaly, Central Greece, Attica and Evia – there will be local snowfalls. The islands of the Aegean Sea will be dominated by rain and thunderstorms.

The coldest day will be Thursday 25 March when snowfalls reach the southern part of the country. Snow will fall in the Peloponnese and northern Attica.

In Phthiotis, Boeotia and Thessaly, snowfalls are expected even in the lowlands, and the Peloponnese mountains will be dressed in “white” clothes.

Nevertheless, spring takes its toll, and by Friday the temperature in Athens will begin to rise to 10-13 degrees Celsius, and by Saturday the thermometer has a chance to rise to 16 ° C.