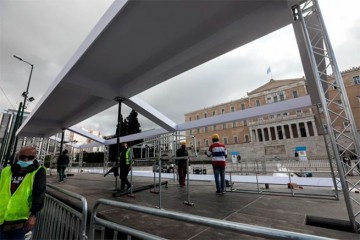 The parade to mark the 200th anniversary of the Greek Revolution of 1821 and the opening of the National Gallery will take place with draconian security measures: about 4,000 police officers, 2 helicopters, 6 drones, a triple cordon, sappers with dogs, cell phone jammers and rooftop snipers.

These measures will be even more serious than the usual security measures for the visit of heads of state, and will begin from the moment the official guests arrive in Athens.

Vans with jamming systems for mobile communications will be located along the perimeter of the cordon zone, groups of sappers with dogs trained to detect explosives will be located nearby, and hotels, which will accommodate official guests, will turn into real “fortresses”. Competent employees of EL.AS. they are already setting up a “curtain” of security, so as not to stain the moment of triumph in any way, since “the whole world will be watching it.” From 06:00 on Wednesday morning, the “cleaning” of the official routes, along which the guests will pass, as well as the streets, suitable for the parade and festive events, will begin. In all buildings along the route of the distinguished guests, checks will be carried out in advance, and where difficulties may arise, police squads will be left. An important role, from a security point of view, will be played by the EYP special services and the counter-terrorism service, whose activities will be aimed at preventing the actions of various activists or terrorist acts, since any such phenomena would have an international resonance and could damage Greece’s prestige. About 3,000 police officers will be involved in guarding the parade and 600 at the opening of the National Gallery. It is known that the official guests will be accompanied by policemen in bulletproof vests. Meetings are reportedly held at the Ministry of Citizens’ Protection and at the Greek Police Headquarters to clarify the latest details.

The main security measures will be centered around the official platform. Concentric guards will be located at a distance of 50 to 500 meters and police blogging points will be installed, which will make it impossible for ordinary citizens to access. In addition to the physical presence of the police, an “electronic safety net” is provided at all levels.

Among the official guests will be present: the heir to the British throne, Prince Charles and his wife Camilla, Russian Prime Minister Mikhail Mishustin, President of the Republic of Cyprus Nikos Anastasiades and French Defense Minister Florence Parley.

Distinguished guests, together with the President of the Republic Katerina Sakellaropulu, Prime Minister Kyriakos Mitsotakis and his closest entourage, will observe military parade at Syntagma, which will take place subject to strict measures to combat coronavirus, without the presence of people.

On the eve of the national anniversary, foreign leaders will attend the opening of the new building of the National Gallery, where they will be introduced to a special exhibition dedicated to the heroes of the 1821 revolution. On the sidelines of the events and during a two-day stay in Greece, the distinguished guests will meet with the political and state leadership of Greece.