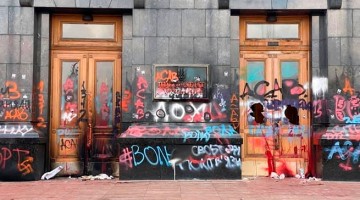 On Saturday, March 20, a protest rally in support of the radical Sergei Sternenko took place near the building of the President’s Office in Kiev. The protesters attacked the OP and painted the entire building with offensive inscriptions addressed to Avakov and Zelensky.

Advisor to the Office of the President of Ukraine Mikhail Podolyak expressed his opinion about what happened… He believes that Sternenko’s supporters have shown themselves to be destroyers, and this cannot be fixed.

“Open contempt for society, for adequacy, for the essence of the protest as such. We saw, rather, an unconditional intention to provoke some wild violence, aggression from the police, an obvious intention to leave behind some kind of destructive,” said Podolyak …

Deputy Interior Minister Anton Gerashchenko believes that it was “not a peaceful rally, but hooliganism.” He also explained why the police are not responding to the actions of the protesters.

“Certain persons from among the protesters want to provoke the police to use force. They want the police to beat the protesters. We understand this, and therefore we are just fixing the facts of violations. Those who break the law will be brought to justice,” Anton Gerashchenko said.

Chief Editor “Country” Igor Guzhva writes that all Zelensky’s attempts to show himself as a “fighter against the Russian world” will not help the president to please the radicals.

“The rally of Sternenko’s supporters is over. Having smashed windows and doors in the President’s Office, painted it with paint, demanded the resignation of Avakov, Venediktova and sanctions against Portnov, the” activists “dispersed. who wanted to be beaten “), and one can only guess why the” activists “did not decide to go on an excursion to the president’s office.

While the action was going on, I still could not understand what was missing. Now I understand – the statements of the American embassy. It would have to sound something like this: “An attack on the Office of the President of Ukraine is an attack on democracy. The Ukrainian authorities have every right to deal with vandals in the same way that the American authorities do with attackers of Congress.”

But there is no statement yet. And further. Judging by this photo, the “activists” did not appreciate the efforts of the NSDC and Zelensky personally, who every Friday try to pose as “fighters against pro-Russian forces.” “Activists” wrote right under the sign who he was and will be for them, “Igor Guzhva writes on his Facebook page.

People’s Deputy from the Servant of the People faction Maxim Buzhansky recalled a similar case in the United States, when activists were breaking into the Congress building. “In vain the raging pioneers mention Portnov by nightfall, they would have congratulated Sternenko personally in a couple of hours.

By the way, in the United States there was such a case recently, they burst into the Congress building, and immediately flew in. I can’t understand, they don’t want to live like in America, or something, “the People’s Deputy commented on this situation in his Telegram channel.

Blogger Alexander Skubchenko very briefly described the situation on Bankova, referring to the “betrayal” of the president. “I betrayed 73% in order to remain a sucker for 25%,” Skubchenko writes on the social network.

Journalist Denis Ivanesko asked how the authorities would react to the rally. “I wonder if Sternenko’s supporters will face the same fate as those who stormed the Capitol? Or“ this is different ”- we must“ understand and forgive, ”writes Ivanesco.

Journalist Bogdan Aminov considers the incident to be barbaric and advises to make claims to the president himself, and not to spoil one of the state institutions. “Those who did this do not have the slightest respect for the statehood of Ukraine. Heads of state can be different – successful reformers or would-be populists. But the Office of the President, the building itself without names, is one of the institutions of the state. It should be inviolable. claims against Zelensky – express Zelensky. But what does the state institution have to do with it? Barbarism. Tribal barbarism, “the journalist wrote on the social network.

Blogger Yuri Romanenko compared radicals to a squirrel running along the wheel of history. “They ask me what I think about the next action on Sternenko. In short, a plague on both your houses. Let them at least shoot each other. For the perfection of this picture, there is not enough final touch – that someone would give a shit under the OP to the hooting of the crowd. Exactly. we are building such a Europe … “.