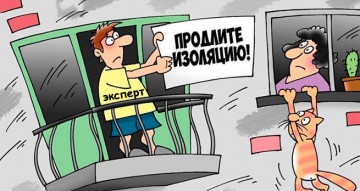 “The country’s complex epidemiological picture does not seem to allow further opening of retail trade in non-food products and the gradual elimination of quarantine measures,” according to experts advising the Greek government.

Open-air health centers and archaeological sites, incl. Acropolis, opened today. IN churches allowed services with a limited number of parishioners, opened by appointment hairdressers and beauty salons, opened parks and were allowed to walk or bicycles go fishingBut at the expense of opening retail stores and schools, it is still not clear.

According to experts advising the government, retail trade in non-food products (and this is clothing, furniture, cosmetics and everything that is not related to food) may or may not be open next week.

The reason for the delays, according to the authorities, lies in the large number of new cases reported by EODY. The national health system is in the red despite the Ministry of Health hiring 206 private doctors to staff hospitals next month that have exceeded their limits and are currently undergoing major coronavirus testing. Just yesterday, EODY announced that 681 people have been intubated in the country, and, accordingly, there are no more than 36 free places left.

Today, Monday 22 March, the National Public Health Organization announced that “the total number of cases was 238,830 (daily change + 0.7%), of which 51.5% are men. Based on confirmed cases in the last 7 days, 79 are considered associated with trips from abroad, and 3075 – with an already known case.

The government is waiting for proposals from experts
In this situation, the government is likely to freeze the easing of measures and is waiting for proposals from experts. The epidemiological situation will be considered at the meetings of the Commission on Infectious Diseases, as it will be formed on the basis of new data. And by the looks of it, the green light for retail opening is expected to change to red.

The opening of restaurants and schools is also postponed.
Recall that, according to the plan for the gradual lifting of the blockage and the resumption of the work of public catering establishments, the preferred date is April 19. However, both the government and the expert committee make it clear that this will only happen if epidemiological data allow and the vaccination process progresses. As everything shows, this will be postponed until later.

The same seems to apply to the return of students to classrooms. The government is prioritizing lyceums because of all-Greek examinations, but also gymnasiums, but the goal of opening by the end of March does not seem to have been achieved. Moreover, judging by the opinion of Russian Athens sources, the real lifting of restrictive measures should not be expected until the end of Easter. Well, God forbid us to be mistaken.